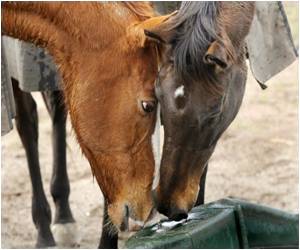 Eight Australians were exposed to the potentially deadly Hendra virus, which is spread to humans from horses.

They all came into contact with a horse that died from the infectious disease at Biddaddaba, in southeast Queensland, on Sunday.

Acting Queensland chief health officer Aaron Groves said they were all deemed to have had "low to moderate" exposure but were given blood tests to make sure.


None were so far showing any active signs of the virus, which can lead to fatal respiratory illness and has killed four of the seven people who have contracted it in Australia since it was first documented in 1994.
Advertisement
Named after the Brisbane suburb in which is was first documented, Hendra is understood to be carried by fruit bats and spread via their urine and droppings.

The bats, which have no symptoms of disease, then pass the infection to horses, possibly via half-chewed fruit or other water or food they contaminate, and these animals then transmit it to humans.

"We believe we've got any disease contained," he said.

Scientists Report Progress in Fight Against Hendra Virus
Scientists are reporting progress in the fight against the deadly Hendra virus following the ......

New Drug to Halt Hendra Virus Spread Tested on Humans
An experimental drug so far only tested on animals has been given to an Australian woman and child ....