As Armenians Turn Off the Gas, Forests Come Under Threat 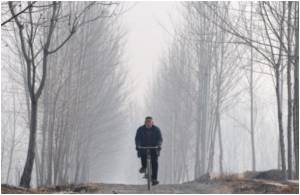 In order to survive the long, harsh Armenian winter, it is common to see a chimney belching smoke from the iron stove. The Karapetians' house in the village of Byurakan, which lies under heavy snow, is no exception.

The Karapetians say that they spend most of the winter months huddling around the stove for warmth in the middle of their tiny, sparsely furnished living room.

"We use the stove to heat the house and water for baths and laundry, for cooking and making tea," said Astgik Karapetian.


The village has a gas supply, but like many other families in Armenia, the Karapetians use an old-fashioned wood-burning stove instead because they simply cannot afford to pay for gas -- a phenomenon that has accelerated the destruction of the country's precious forests.
Advertisement
There was a 15 percent drop in gas consumption in the ex-Soviet republic last year as people increasingly returned to wood-stove heating following a 37 percent gas price rise -- the result of a tariff hike by Russian energy exporter Gazprom.

Environmentalists fear that another potential price rise this year could create an even bigger threat to the country's forests, causing impoverished Armenians to cut down yet more trees for cheap fuel.

"Imagine what will happen when, after a second increase in gas prices that's expected in April, the urban population also starts using firewood instead of gas," said Nazeli Vardanian, the head of the Armenian Forests environmental group.

"As a result we will lose our forests -- the ecological consequences will be catastrophic," she said.

The Karapetians' house used to stand right at the edge of a forest, said Astgik's husband David, but since the family started to chop timber for fuel, "the forest began to move further away".

In Byurakan, there are piles of chopped firewood in the yard of nearly every house, as locals collect what supplies they can to see them through the winter, sometimes chopping down fruit trees in their own orchards for fuel.

Another villager, Ruben Babaian, said that his house has gas installed but his family has had to stop using it.

"We used to heat our house with gas because prices were affordable, but since last April when the Russians increased the gas price, we haven't be able to do it," he said.

Some environmentalists believe however that organised illicit logging enterprises are to blame for the deforestation which has seriously damaged Armenia's woodlands, not impoverished villagers.

"The amount of illegal logging has grown to such an extent that by 2020, international experts believe, there will be no forests left in Armenia," said Inga Zarafian, head of the campaign group Ecolur.

Former environment minister Karine Danielian said that even during the desperate economic period during and after Armenia's war with neighbouring Azerbaijan in the 1990s, deforestation was much less intense than it is today.

"Then people used to cut wood for heating, now tree-felling is happening on an industrial scale," said Danielian, who now runs a group called For Stable Human Development.

The country's chief forestry official, Ruben Petrosian, said that the government has dedicated $55 million (40 million euros) to a longterm programme "aimed at protecting and restoring forests".

But environmentalists are urging the authorities to speed up their efforts to avert more damage next winter.

"Subsidies for gas must be offered to residents of remote villages and they must be allowed to collect fallen wood free of charge," said Nazeli Vardanian.

Meanwhile, people in villages like Byurakan are waiting for spring to come -- and for the outcome of upcoming price negotiations with Gazprom, which could cause yet more Armenians to turn off the gas.