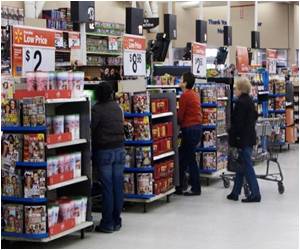 Georgia Benjamin will rely on her smartphone to guide her to the items she is seeking and the best deals this holiday season.

A transplanted Londoner working in New York as a fashion design intern, Benjamin said she has been using Snapette, a mobile app that allows her to find items in nearby retail stores.

"There are things on the app that I might not see otherwise," she said.


"If I'm looking for a pair of sunglasses, I will type in the brand name, and it will show me what is nearby. And it will alert me if a store nearby has a promotion."
Advertisement
In the past, Benjamin told AFP, she would "trudge from store to store on Oxford Street" in London, or "go through website after website" to search for holiday gifts.

As the holiday shopping season opens, shoppers will be armed with smartphones and an array of apps. Some will compare prices, offer gift suggestions, provide price alerts and more.

Snapette says nearly two million people have downloaded the app for iPhones or Android handsets to fill a need for people who want to use online tools but shop in local stores.

"Over 85 percent of retail sales is happening in stores but there wasn't a great way to search for or discover products nearby," said Sarah Paiji, co-founder and president of Snapette.

"We want to enable that shopper to shop in the real world as well as online."

Snapette, which was acquired this year by online commerce site PriceGrabber, has data from some 270 US retailers and can direct a consumer to an in-store product, but also allows them to buy online directly from the app.

Scores of other smartphone apps also can be used by on-the-go shoppers. Amazon has one allowing a price check with the online retailer. Others can deliver digital coupons.

One called RedLaser will scan a bar code and tell a shopper if the product is less expensive somewhere else. Smoopa will similarly tell a consumer if the store price is a bargain. Zoomingo helps find sales in local retail stores and allows consumers to share ideas.

ShopSavvy, a mobile shopping assistant that is one of the first apps developed for Android phones four years ago, has had some 40 million downloads and has data from 40,000 retailers in Austria, Britain, Germany, Japan and the United States.

"It gives the retailer a new way to communicate with the customer," co-founder and chief executive John Boyd told AFP.

"I think it helps people buy products and to some extent it drives new sales. People are really well-armed with ShopSavvy. If there is a big price discrepancy, they have a local price check. We also let them know if they find a better price online."

ShopSavvy, which is available for iPhones and Windows Phone as well as Android, also provides reviews and product details, and helps people organize shopping lists.

It partners with a wide range of retail stores, including grocery, apparel and home improvement, but Boyd called it a "a neutral aggregator."

The growing app use comes with retailers struggling to keep pace with surging online shopping.

An NPD survey found 75 percent of smartphone users will use the device as part of their holiday shopping, with many helped by in-store apps from retailers like Target or Macy's, as well as external ones like Snapette.

The National Retail Federation said it expects 97 million people to shop on Black Friday, the traditional start of the holiday shopping season after Thanksgiving Day. That will kick off a holiday season expected to see some $600 billion in sales, including $80 billion online.

"We want to be a comprehensive, one-stop shop where you can browse products online as well as nearby," said Paiji.

In recent years, consumers have been driven to a practice known as "showrooming," or visiting a store to see a product, then purchasing it online at a lower price.

But Paiji said apps like Snapette "are the reverse of showrooming" because they encourage people to buy products in stores.

"I think the playing field is more equal," he said. "This is an opportunity for retailers."

US Stores Put Their Best Effort to Make Big Bucks in the Shopping Season
Black Friday, the pinnacle of the US shopping year, comes on a Thursday this year. And even ......