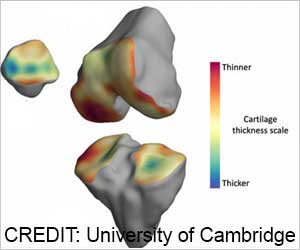 Improved MRI scans which automatically detect small changes in knee joints could aid in the development of arthritis treatments, report a new study. The findings of the study are published in the Journal of Magnetic Resonance Imaging (JMRI).

A team of engineers, radiologists, and physicians, led by the University of Cambridge, developed the algorithm, which builds a three-dimensional model of an individual's knee joint in order to map where arthritis is affecting the knee. It then automatically creates 'change maps' which not only tell researchers whether there have been significant changes during the study but allow them to locate exactly where these are.

There are few effective treatments for arthritis, and the technique could be a considerable boost to efforts to develop and monitor new therapies for the condition.


‘Novel algorithm monitors subtle changes in arthritic joints in CT scans and could develop new therapies for the condition.’


Osteoarthritis is the most common form of arthritis in the UK. It develops when the articular cartilage that coats the ends of bones and allows them to glide smoothly over each other at joints is worn down, resulting in painful, immobile joints. Currently, there is no recognized cure, and the only definitive treatment is surgery for artificial joint replacement.

Osteoarthritis is normally identified on an X-ray by a narrowing of the space between the bones of the joint due to a loss of cartilage. However, X-rays do not have enough sensitivity to detect subtle changes in the joint over time.

"We don't have a good way of detecting these tiny changes in the joint over time in order to see if treatments are having any effect," said Dr. James MacKay from Cambridge's Department of Radiology, and the study's lead author. "In addition, if we're able to detect the early signs of cartilage breakdown in joints, it will help us understand the disease better, which could lead to new treatments for this painful condition."

The current study builds on earlier work from the same team, who developed an algorithm to monitor subtle changes in arthritic joints in CT scans. Now, they are using similar techniques for MRI, which provides complete information about the composition of tissue - not just information about the thickness of cartilage or bone.

MRI is already widely used to diagnose joint problems, including arthritis, but manually labeling each image is time-consuming, and maybe less accurate than automated or semi-automated techniques when detecting small changes over a period of months or years.

"Thanks to the engineering expertise of our team, we now have a better way of looking at the joint," said MacKay.

The technique MacKay and his colleagues from Cambridge's Department of Engineering developed, called 3D cartilage surface mapping (3D-CaSM), was able to pick up changes over a period of six months that weren't detected using standard X-ray or MRI techniques.

The researchers tested their algorithm on knee joints from bodies that had been donated for medical research, and a further study with human participants between 40 and 60 years old. All of the participants suffered from knee pain but were considered too young for a knee replacement. Their joints were then compared with people of a similar age with no joint pain.

"There's a certain degree of deterioration of the joint that happens as a normal part of aging, but we wanted to make sure that the changes we were detecting were caused by arthritis," said MacKay. "The increased sensitivity that 3D-CaSM provides allows us to make this distinction, which we hope will make it a valuable tool for testing the effectiveness of new therapies."

As part of a separate study funded by the European Union, the researchers will also be using the algorithm to test whether it can predict which patients will need a knee replacement by detecting early signs of arthritis.