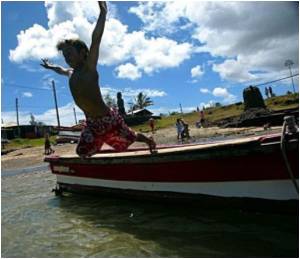 The key to delaying ageing in humans is held in marine animals that reproduce asexually by cloning, scientists at the University of Gothenburg believe.

They have shown how colony-forming ascidians (or sea squirts) can activate the enzyme telomerase, which protects DNA. This enzyme is more active also in humans who attain an advanced age.

"Animals that clone themselves, in which part of an individual's body is passes on to the next generations, have particularly interesting conditions related to remaining in good health to persist. This makes it useful to study these animals in order to understand mechanisms of ageing in humans," said Helen Nilsson Skold.


There are enormous differences in the lengths of life of the Earth's species. Some animals and plants that reproduce asexually can in principle achieve essentially eternal life; there are examples of deep-sea corals that are tens of thousands of years old.

Is there anyone in this world who fails to be swayed by the magic of youth? None, for when youth explodes joyously all Nature smiles!
Advertisement
Skold decided to study sea squirts and starfish, which are species whose genes resemble closely those of humans.

"My research has shown that sea squirts rejuvenate themselves by activating the enzyme telomerase, and in this way extending their chromosomes and protecting their DNA. They also have a special ability to discard 'junk' from their cells. Older parts of the animal are quite simply broken down, and are then partially recycled when new and healthy parts grow out from the adult bodies," she said.

Some species of starfish reproduce asexually by tearing apart their bodies, while others reproduce sexually only.

This makes them particularly interesting animals to study. Both types of starfish can reconstruct lost body parts, but the species that reproduce asexually have considerably better health.

However, one consequence of asexual reproduction is that the species as a whole will have a very low genetic variation.

This means that they will be particularly vulnerable to climate change, and the subsequent new types of changes in the environment. There is a high risk that these animals and plants will lose out - and then we will lose important knowledge about the riddle of ageing.

Encyclopedia section of Medindia gives a preview about Human Growth Hormone (HGH)
Advertisement
<< Great Week Ahead as Britain Gears Up for Global Royal Weddi...
Research Reveals How DNA Testing Could Help You Track Down ... >>