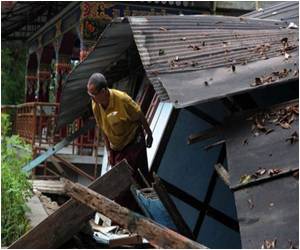 L.S. Rathore, director general of the India Meteorology Department (IMD) said the aftershocks are likely to continue in Nepal which was hit by massive earthquake yesterday killing over 1,800 and injuring around 5,000 people.

"More than two-and-a-half dozen aftershocks of magnitude four and above have been observed. These kinds of aftershocks are likely to continue for a while, so people should take precautions," Rathore said. "Rain is expected there and it can further trigger landslide. People are advised to keep away from such sites," he added.

Nepal Ambassador to India Deep Kumar Upadhyay on Sunday said that over 1,800 people were killed and more than 5,000 injured in the massive earthquake that hit Nepal yesterday. "As per official figures, 1800 are dead and more than 5000 are injured. We are very thankful to Indian Government. India has sent medical assistance, NDRF teams. Prime Minister Modi expressed concern," Upadhyay said.


The Indian Government had earlier sent four aircrafts with NDRF teams to oversee rescue and relief operations and also set up a 24-hour control room for queries regarding the tragedy.

The impact of the earthquake was felt in almost all northern states in India particularly in Bihar, Uttar Pradesh, Sikkim and West Bengal.

Indian Artist Creates Sand-art to Raise Awareness About Nepal Earthquake Victims
Sudarshan Patnaik, the Indian artist famous for his sand sculptures, said people from all over the ....

Nepal Earthquake: National Geophysical Research Institute to Asses Seismic Hazard Level
The earthquake that struck Nepal is understood to be a typical Himalayan earthquake caused by the .....

Mount Everest Climbers's Horrifying Tweets as a Massive Avalanche Hits Base Camps
As an earthquake hit Nepal, the climbers used social media to keep the world appraised of the loss ....