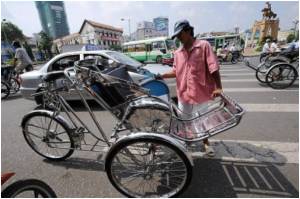 Nguyen Huu Son has guided Chinese tourists around Vietnam's popular coastal city Danang for years, but a bitter maritime dispute between Hanoi and Beijing means he is now out of work.

Relations between the communist neighbours plunged to their lowest point in decades when Beijing moved a deep-sea oil rig into disputed waters in the South China Sea in early May, triggering deadly riots in Vietnam.

China suffers from one of the worst gender imbalances in the world as families prefer male children.
Advertisement

The rig has since been withdrawn. But the Chinese tourists have not returned.


"It's never been this bad before... My company has almost no customers, no work," Son told AFP.

Son's salary has been cut by two-thirds, but he feels "embarrassed" to take even this reduced pay package as he knows his company is not making any money at all.

As dozens of curious onlookers watch in amazement, the Vietnamese spirit medium dances in a trance, attacking invisible enemies with a sword as drums beat.
Advertisement
"We focus on individual travellers, not tour groups, and 100 percent of them cancelled... I have nothing to do with my time," he said, adding that he was mulling a change of career.

After the mid-May riots, in which China says four of its nationals were killed, Beijing evacuated thousands of citizens and issued a "yellow" travel warning for Vietnam.

While this was reasonable in the immediate aftermath of the riots -- which mostly affected Taiwanese and South Korean businesses -- maintaining the travel warning when any danger to tourists has passed smacks of politics, said Professor Jonathan London at City University of Hong Kong.

"It reminds one of Beijing's campaign to reduce mainland tourism to the Philippines," London said, referring the economic fallout from the 2012 standoff over the Scarborough Shoal.

After a dispute over the uninhabited shoal, Beijing warned its citizens about travel safety in the Philippines, prompting mass cancellations.

Chinese tourist arrivals to Vietnam were down 29.5 percent in June from the previous month, according to official figures.

Vietnam will continue tourism promotion efforts in China, aiming to show "Vietnam is a safe destination," said Nguyen Manh Cuong, an official at the tourism department.

Chinese visitors make up the largest single group of arrivals -- more than 1.1 million in 2014 overall, despite the sharp fall off after May.

The average Chinese visitor stays five days and spends $300 if they travel by land, or $700 if they have arrived by airplane, Cuong said.

This compares to an average stay of about 10 days by European or American tourists, who spend up to $3,000 during that period, official figures show.

The fall in Chinese arrivals after the maritime dispute erupted is understandable as Beijing uses outbound tourism as a "negative sanction", according to Tony Tse, a professor at the school of hotel and tourism management at Hong Kong Polytechnic University.

"Outbound tourism can be used by the Chinese government to show its aggression," he said in a 2013 paper, citing the examples of the Philippines and Japan -- where tourism was hard hit after a 2012 dispute with the latter over the Senkaku islands, known as the Diaoyu in China.

"The hostility in withholding tourism acts like a punishment and China is powerful enough to exercise this kind of sanction," Tse wrote in the paper on how China uses outbound tourism as a form of diplomacy.

Vietnamese tourists have also been cancelling trips to China in droves, although the government has not issued any travel warning, said one travel agent who declined to be named.

"It's a way to express patriotism. Vietnamese like travelling in China... but now they cancel to show their patriotism," he said.

Tran Thi Lan, 54, a primary school teacher from central Nghe An province, had booked a trip to China for this summer which she was "very excited" about.

"We decided to cancel, not the tour operator. The Chinese government's behaviour was unacceptable," she told AFP.

"We decided not to go to show our attitude... We don't want to go on holiday to a country that is invading our waters," she said.

The Vietnam People's Army has undergone a huge transformation from ragtag volunteers having home-made shotguns to telecoms conglomerates and golf courses.
Advertisement
<< Immune System may Play a Negative Role in Brain Injuries an...
Viruses can be an Ally in Destroying Antibiotic-Resistant B... >>

Health Benefits of Egg Oil
News Archive
News Resource
Advertisement
News Category
Tale of Love Hormones Shaping Our Responses to the Society How to Reduce Needle Anxiety in Children? Tobacco Addiction: Here's How to Break the Habit Parents are 'Winging It' on Their Kids' Mobile Use Ankle and Ankle Movements While Riding an Hoverboard
More News
Sign up for Wellness Consult a Doctor Sign up for Selfcare