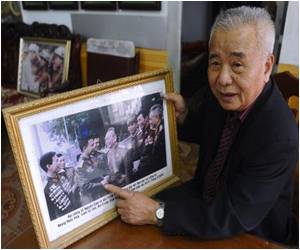 Hoang Dang Vinh recounts the day in May 1954 when, aged just 19, he captured the commander of the French colonial forces. He is one of Vietnam's last surviving veterans of the battle of Dien Bien Phu.

Exactly what happened next has not been recorded in the annals of history and Castries is no longer alive to tell his story, but historians confirm the general outline of Vinh's account, even if some details are uncertain.

Castries, then 51, who was promoted to the rank of general during the battle, insisted the day after his liberation in September 1954 that the white flag of surrender was not raised on his command.

"We called to the people inside to surrender but nobody came out. A few minutes later, some French soldier waved a white cloth parachute," he said.

Vinh and a few other soldiers, including the leader of his company, Ta Quoc Luaat, entered the bunker and the French officers inside "stood up and put their hands in the air -- but only Castries remained motionless".

"I was ready to shoot him," said Vinh, who came from a poor peasant family and joined up as a private at 17.

But instead he shouted "hands up" -- the only words of French he knew.

Castries "stepped back, put his hands in the air and said words that Luaat translated for me later: 'Don't shoot -- I surrender'", Vinh told AFP.

Vinh was speaking at his house in northern Bac Ninh near Hanoi, where the walls are covered in photos of war and medals he won during his 39 years of service.

Legendary Vietnamese General Vo Nguyen Giap could not believe the news when it was first relayed by radio, he recalled.

"Is it true that you have captured General de Castries?" the master military strategist, who died late last year at 102, kept asking, before he finally expressed his joy and praise.

Along with the glory, the horrors of one of the most terrible battles in the Indochina war are still etched on his memory.

"The fighting was extremely bloody," he said, his voice trembling as he described the bodies that littered the battlefield, their arms and legs torn off.

Some 3,000 French soldiers and at least 10,000 Vietnamese died at Dien Bien Phu, which marked the end of French dominance in Indochina.

Vinh, like many of his comrades, never received much training: a month of practice using firearms and explosives and he was then set for life in the trenches -- which were a crucial part of the Viet Minh army's strategy.

Five of the Viet Minh's seven divisions were concentrated around Dien Bien Phu -- and spent most of their time in the dank, uncomfortable trenches.

"They were hiding in the trenches for months... we did everything there, including all medical services," he said.

"I weighed only around 40 kilos. Life was very difficult," he said, adding he still remembered the "hatred" he felt for the French at the time.

Vietnamese forces laid siege to the French positions for weeks and on May 7, French soldiers laid down their arms en masse.

As the 60th anniversary of the victory approaches, Vinh says "it was not easy to defeat the French" but holds the colonial power made a crucial mistake in underestimating its adversaries.

"They lost because they couldn't believe that the Viet Minh could win at Dien Bien Phu."