A Revolutionary Trip Down Tanzania's History 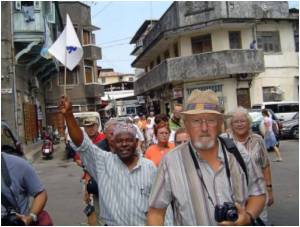 Mejah Mbuya hops off his bike outside a building that seems to be unoccupied. Searching in vain he murmurs, "there used to be a plaque around here somewhere".

The building is in central Dar es Salaam, Tanzania's steamy port city, and looks like many of the other older buildings in the area, in need of repair and dwarfed by proliferating highrises.

"Anyway," Mbuya says, "this is the former head office of FRELIMO."


The Mozambique Liberation Front, or FRELIMO, was founded in Dar es Salaam in June 1962. The movement used the Tanzanian capital as its home base for 13 years, until Mozambique achieved independence in 1975.
Advertisement
Mbuya is the co-founder of a unique tour company called Afri Roots. Along with safaris and treks, it also offers walking and cycling tours in Dar es Salaam, Tanzania's booming economic and cultural capital that is also steeped in the history of Africa's revolutionary past and struggle against colonialism, as well as the struggles of African-Americans.

Tanzania, which marks its 50th independence anniversary this year, once served as the headquarters for Nelson Mandela's African National Congress (ANC) and the fight against apartheid, something that has been all but forgotten by many South Africans and even many Tanzanians.

Mbuya hopes to change that.

"I want Tanzanians to know their history. It's something that they should know and be proud of," said Mbuya, who looks much younger than his 39 years, dressed in cargo shorts and an Afri Roots T-shirt, his dreadlocked hair bound in a do-rag.

"But I also want to share this history with the rest of the world, especially those in South Africa. There's a lot of xenophobia in South Africa right now. They're worried that people from other parts of Africa will come and take their jobs. I want South Africans to remember the huge debt they owe to Tanzania, and other African countries as well -- the price that others paid for their freedom."

In 1960, after the Sharpeville Massacre, both the ANC and the Pan Africanist Congress (PAC) were banned by the apartheid regime. Its members fled into exile and many were welcomed into Tanzania, then the newly independent and African Socialism-inspired nation of Tanganyika.

Mandela himself arrived in 1962 seeking financial and military support, and the ANC set up their office in Dar es Salaam -- just across the street from the FRELIMO building. Military training camps were set up in the towns of Morogoro, Mbeya and Bagamoyo.

The tour with Afri Roots, which begins in the steam and stench of the fish market, continues to the New Africa Hotel, once a popular meeting spot for ANC members and other freedom movements and immortalised by the Polish journalist and writer Ryszard Kapuscinski.

"One can spot sitting at one table Mondlane from Mozambique, Kaunda from Zambia, Mugabe from Rhodesia. At another, Karume from Zanzibar, Chisiza from Malawi, Nujoma from Namibia..." Kapuscinski wrote in his book "In The Shadow of the Sun", describing the scene in the hotel in the early 1960s.

"In the evening, when it grows cooler and a refreshing breeze blows in from the sea, the terrace fills with people discussing, planning courses of action, calculating their strengths and assessing their chances."

Next stop is a building where African-American icon Malcolm X stayed when he visited in 1964 -- since converted from an old hotel into modern office space that is in high demand in the east African trade hub.

The itinerary continues to the New Zahir restaurant, still bustling with a lunchtime crowd, and where Argentinian revolutionary Che Guevara -- who went by the codename "Tatu", Swahili for "three", while undercover in the city -- dined with Congolese comrades before their ill-fated campaign in the jungles of the Congo.

Leaders of the Black Panther Party also spent time in Dar es Salaam, Mbuya shouts over his shoulder as the tour continues. Many were inspired by Julius Nyerere, Tanzania's socialist and pan-Africanist president from 1964 to 1985.

"Black power" philosopher Stokely Carmichael visited in 1967, while fugitive Panther Pete O'Neil went into exile in Tanzania -- where he remains to this day, albeit far inland from the hustle and heat of Dar es Salaam.

Tanzania's honeymoon with African-Americans soured in 1974 after the revolutionary visitors were implicated in using the city to smuggle weapons. The entire community was rounded up and thrown in jail.

At the end of the tour and over a large glass of sugarcane juice, Mbuya bemoans that while Tanzania gave so much to the great struggles of the 20th century, the country itself remains underdeveloped.

"Tanzania was like a candle," he said. "It gave light to others that needed hope, but in the process it burned itself down."