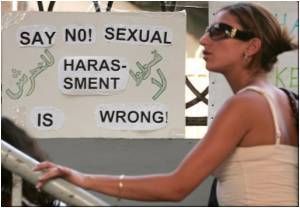 Nine in ten women, the shocking results of a new study reveal, have suffered some form of sexual discrimination at the workplace.

The researchers at the University of Michigan found that 10 per cent of the women surveyed had experienced the most severe form of harassment, in which they were promised promotion or better treatment if they were 'sexually cooperative'.

Sense of Weakness Forces Sexually Harassed Women Out of Office

Women who have undergone sexual harassment at their office are likely to leave the organisation because of their inability to bring about a positive solution to the situation, a new

The study questioned women in two male-dominated environments - the US military and the legal profession.


It found that although few were subjected to actual advances, such as being groped, 90 per cent had been subjected to gender harassment.

This included offensive remarks about being female, their appearance, body or sexual activities.

The self esteem of sexually harassed employees takes a beating, such that it begins to negatively impact their organisational commitment.

The researchers argued that this 'leads to negative personal and professional outcomes and as such is a serious form of sex discrimination', reports the Mail Online.

The findings concluded that harassment victims fared poorly at work.

The study is published in Springer's journal of Law and Human Behaviour.

Contrary to the common assumptions, women experience more sexual harassment in work groups with equal number of males and females.