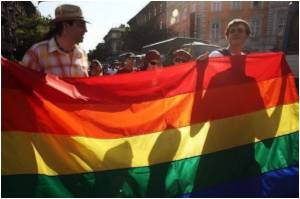 For three hours on Saturday, throngs of jubilant demonstrators aboard colorful floats and convertibles, but mostly on foot, streamed down Paseo de la Reforma to gather outside the Bellas Artes Palace, in the oldest part of the city.


"We're here to celebrate that we are a city that doesn't discriminate or despise, but respects homosexuals, that allows us to marry, work and hold hands in the street," Orlando Garcia told AFP while marching hand-in-hand with his partner.


Mexico City's left-leaning legislature on December 21 approved gay marriage and opened the way for gay adoptions, provoking a wave of uproar from religious groups in the Catholic nation and conservatives including President Felipe Calderon.

Two Mexican women became the first to wed in Mexico City on March 11, but Calderon's administration has since contested the city law in the country's Supreme Court, which has yet to rule on whether gay marriage is allowed by the constitution.

The gay pride parade also celebrated late author and gay-rights advocate Carlos Monsivais, who passed away a week ago in Mexico City at the age of 72.

Moscow Gay Pride Ban Not an Issue With Rights Activists
Gay rights activists vowed on Thursday to go ahead with a gay pride demonstration in Moscow this weekend, despite a ban by the city authorities.
READ MORE 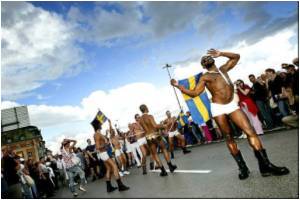 35,000 Take Part in Brussels' Gay Pride Parade
Tens of thousands of people joined a Gay Pride march in Brussels on Saturday, calling for an end to discrimination against homosexuals and lesbians in Europe.
READ MORE

In Sydney, 10,000 to March for Gay Pride
Sydney celebrated its 32nd gay and lesbian Mardi Gras parade even as Almost 10,000 people shimmied, strutted and strode through the ages on Saturday.
READ MORE

Moscow Mayor Says 'Satanic' Gay Pride Marchers be Punished
Known for his overtly homophobic statements, the mayor of Moscow said Monday that he would never allow a gay pride parade in the city, calling it "Satanic" and saying marchers should be punished.
READ MORE