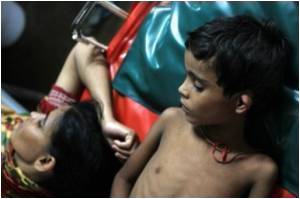 It is reported that over 300 persons fell victims to food poisoning at a religious function in West Bengal's East Midnapore District.

The victims consumed the religious offerings during a mass meal served at a gathering in Badalpur village on the Contai Block of the district on Saturday evening.

"400 people were invited to a religious function and all of them were badly affected by food poisoning.


We arranged some doctors and nurses for their treatment. 15 patients are already admitted at Contai Sub Divisional hospital, other patients will also be sent to hospital," said Prasun Ghosh, Block Development Officer (BDO), Contai, East Midnapore.

While critical patients were admitted to a local hospital, others were being treated at temporary medical camps. By Rick Sundar

Giardiasis is an infection of the small intestine caused by a parasite called Giardia lamblia .
Advertisement