18 Dead from Bird Flu in China 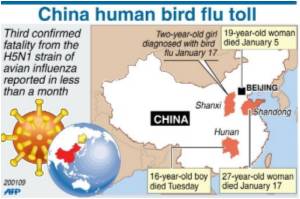 In China the death toll from a new strain of bird flu has reached 18, with dozens infected, state-run media reported, after experts said there is no evidence so far of human-to-human transmission.

A 69-year-old man surnamed Xu is the most recent person to die from from the H7N9 virus, China's official news-agency Xinhua said on its website Saturday. He died on Friday in eastern province of Zhejiang, the agency said.

The virus has been found in a total of 96 people, mostly in eastern China, but the World Health Organisation (WHO) said on Saturday that there was "no evidence of ongoing human-to-human transmission".


The Chinese Center for Disease Control and Prevention had earlier said 40 percent of patients with H7N9 had not come into contact with poultry, raising questions about how people are becoming infected.
Advertisement
It also emerged that the virus had spread among family members in China's commercial hub Shanghai, raising fears that it was passing between humans.

Referring to those cases on Friday, the WHO's representative in China, Michael O'Leary, said investigators were trying to determine whether there had been human-to-human transmission between family members.

"The primary focus of the investigation is to determine whether this is in fact spreading at a lower level among humans. But there is no evidence for that so far except in these very rare instances," he said.

O'Leary also said that over 50 percent of those with the virus remembered coming into contact with birds.

"As the investigation gets deeper we have found more than half where there is a known contact with poultry," he said.

A 15-strong team of international health experts are carrying out a week-long mission in Beijing and Shanghai to investigate the virus, for which no vaccine currently exists.

Since China announced nearly three weeks ago that it had found the strain in people for the first time, almost all of the cases have occurred in Shanghai and four nearby provinces while one appeared in Beijing.

The WHO has praised Chinese authorities for their handling of the crisis.