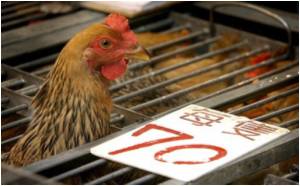 The Chinese government confirmed that a new strain of avian flu, H7N9, which has not been previously transmitted to humans, has led to the deaths of two people in the country.

A 35-year-old woman in the eastern province of Anhui became ill on March 9 and is in critical condition, it said.


All three initially suffered fever and coughs but later developed severe pneumonia and problems with breathing, according to the announcement.

The three cases were confirmed Saturday to be infections with the H7N9 sub-strain after the Chinese Center for Disease Control and Preservation had separated it from body samples the day before, the commission said.
Advertisement
The route of infection remained unknown although nothing unusual was detected among 88 people close to the victims, the commission said.

The H7N9 strain had not been transmitted to humans before, it added.

In a separate release, the commission said there are currently no vaccines against H7N9.

It also explained that the delay in announcing the results was because it took time to determine the cause of the illnesses.

The World Health Organisation (WHO), in an emailed statement to AFP, said there was no evidence of human-to-human transmission in the three reported cases.

It also said transmission to humans "would appear to be inefficient, leading us to believe that the risk to public health is low".

But the WHO said it was continuing closely to monitor the situation.

China is considered one of the nations most at risk from bird flu because it has the world's biggest poultry population and many chickens in rural areas are kept close to humans.

It has in the past been accused of covering up the extent of bird flu outbreaks, exacerbating fears when new cases are reported.

The WHO says more than 360 confirmed human deaths from the H5N1 strain of avian influenza have been reported to it globally from 2003 until March 12 this year.

It says other sub-types have infected humans, including H7N7 and H9N2, and some of these infections led to deaths.