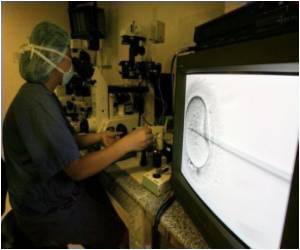 The maximum number of eggs to harvest from a woman's ovaries undergoing fertility treatments is 15, say researchers.

Investigators led by Arri Coomarasamy of the University of Birmingham in central England looked at data from more than 400,000 IVF cycles in Britain between 1991 and 2008.

Harvesting around 15 eggs in one go gave the best statistical chance of a live birth, they found.


This finding is in line with middle-range doses of powerful hormones to stimulate egg production, they found.

The chances of a baby level off between 15 and 20 eggs and then steadily decline beyond 20 eggs.

During IVF fertilization takes place invitro, in an incubated petri dish. The resulting embryo is transferred back to the uterus on Day 3 at the 6-8 cell stage. Sometimes the embryo transfer in done at the blastocyst stage on Day 5. The embryo is drawn into a specialized catheter along with a small amount of culture medium and is transferred to the uterus.
Advertisement
The success rate for 15 eggs in 2006-2007 was 40 percent among women aged 18-34, 36 percent for those aged 35-37, 27 percent for those aged 38-39 and 16 percent for women aged 40 or more.

The findings should be a useful tool for fertility doctors who want to make IVF as efficient as possible, avoid wasting precious eggs and limit the risk of dangerously overstimulating the ovaries, say the authors.

Previous research has looked at the link between egg numbers and pregnancy rates, but this is the first to explore the outcome in terms of live births.

The study appears in a European journal, Human Reproduction.

"Live birth" was defined as an event in which at least one baby was born alive.

IVF treatments entail taking eggs and fertilising them in a lab dish with sperm. Several early-stage embryos are then implanted in the uterus in the hope that one will result in a live birth, although multiple births sometimes result.

Embryos that are not immediately implanted are usually frozen, so that they can be thawed for future IVF attempts.

The data used in the study did not distinguish between live births that resulted from fresh or thawed embryos.

There is a general belief that a pregnant woman should eat for two people. How far is this true? This compilation of information, presented in the quiz, will tell you more.
Advertisement
<< Tobacco, Illicit Drugs and Alcohol Use More Common in Aborg...
Millions of Underage Facebook Users >>

Top Ten Incredible Benefits of Eggs and Why Should They be Part of your Daily Diet
News Archive
News Resource
Advertisement
News Category
New Technology can Help Older Women Stay Active and Healthy Why Does a Woman's Brain Change After Menopause? Enjoy Your Breastfeeding by Choosing a Comfortable Feeding Bra Abortions Hit a Record High During Covid in UK: Report High Leptin Levels may Up Lifelong Heart Disease Risk in Mom and Baby
More News
Sign up for Wellness Consult a Doctor Sign up for Selfcare

More News on:
In Vitro Fertilization (IVF) Artificial Insemination Top Ten Budget-Friendly Foods Fat-Burning Foods for Men Top Ten Incredible Benefits of Eggs and Why Should They be Part of your Daily Diet