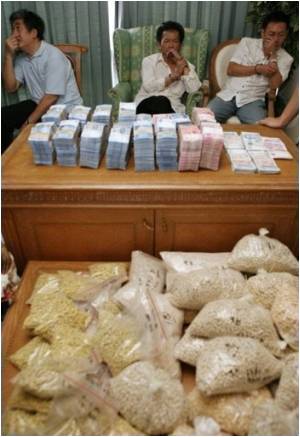 The seizure of 2.4 million counterfeit medications, disguised as Chinese tea, was made at the northern port of Le Havre in February, officials said. The fake pills were in two containers on two different ships from Shanghai.

Before the start of the New Year the FDA has made many announcements of their approval for various drugs.
Advertisement

The haul broke the previous record seizure, which was also made at Le Havre port in 2013 when more than 1.2 million sachets of counterfeit aspirin were confiscated.


Counterfeit drugs accounted for 18 percent of all the seizures made by French customs officials last year, representing 7.6 million items.

The problem of counterfeit drug production in China was highlighted last year when the country's authorities launched a crackdown which led to 1,300 arrests in December and the closure of dozens of unauthorised online pharmacies.

French customs have seized millions of counterfeit medicines that were imported from China claiming to be Aspirin,and other drugs calling it as the biggest haul.
Advertisement
<< Scientists Explore Link Between Low Vitamin D Levels and Fa...
New Target to Treat Cancer, Asthma Identified >>

Kashmir Haunted by the Fear of Fake Drugs

An allegation over the wrongful purchase of antibiotics by a government-appointed committee in Jammu and Kashmir, has now started creating fear in the imagination of the public in the Valley.

The Essence of Yoga Daily Calorie Requirements Color Blindness Calculator Selfie Addiction Calculator How to Reduce School Bag Weight - Simple Tips Iron Intake Calculator Blood Pressure Calculator Noscaphene (Noscapine) Post-Nasal Drip Accident and Trauma Care
This site uses cookies to deliver our services. By using our site, you acknowledge that you have read and understand our Cookie Policy, Privacy Policy, and our Terms of Use