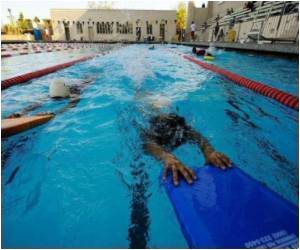 About 89 swimming athletes became ill during the Finals of the Maryland State Swimming Championship on Saturday. A total 100 people have reported symptoms of viral gastroenteritis.

Many volunteers, coaches and parents of the competitors also got sick. Health officials are investigating the pathogen that affected the athletes, trainers and relatives at the state level competition. They are testing stool samples of people who were sick to determine exactly what pathogen caused the illness.

Surface Disinfectants Not Potent Enough to Destroy Viruses That Cause Gastroenteritis

Nearly 40% of available disinfectants that are commonly employed to clean surfaces are incapable of destroying noroviruses, which are behind the onslaught of food borne gastroenteritis.
Advertisement

Chief of the health department's center for surveillance, infection prevention and outbreak response; Dr. Lucy Wilson said that the properly chlorinated swimming pool is an unlikely source of infection. Officials are still investigating the cause of illness.

Campylobacteriosis is a severe form of diarrhea caused by a bacterium Campylobacter jejuni. Causes, symptoms, ...

Gastroenteritis or Stomach Flu or Gastric flu is highly contagious and infectious inflammation of stomach, ...