Blepharoplasty or eyelid lift is a surgical procedure on the eyelids. It is done by plastic surgeons to improve the appearance of the eyes.. It is usually done to correct changes around the eye associated with aging. With age, the skin around the eyes becomes loose resulting in droopy eyelids. Wrinkles called crows feet develop at the corners of the eyes. The lower eyelid develops bags and circles giving a tired appearance. These changes occur due to loss of tone and elasticity of the skin, loss of fat under the skin around the eyes, and loss of tone of a muscle around the eye (orbicularis oculi) or of the orbital septum, the fibrous tissue that connects the bony rim of the eye socket with the eyelids.

Besides cosmetic effect, droopy upper eyelids can also affect the field of vision. The lower eyelid can droop outwards, making it difficult for tears to drain through the eyes. 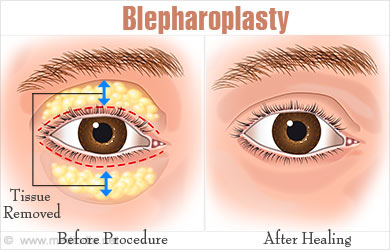 Blepharoplasty is also done to reconstruct the eyelids damaged by a disease like skin cancer. Procedures like laser resurfacing are sometimes done along with blepharoplasty to treat wrinkles around the eyes.

As for other plastic surgery procedures, the cost of the procedure should be found out well before going in for it. It would also be necessary to find out if your insurance will cover the cost.

What Preparations are required prior to Blepharoplasty?

Prior to blepharoplasty, the patient should be evaluated for any illnesses that he/she may be suffering. Details of medications that the patient takes should also be noted.

A detailed eye examination including that of the eyelids, eyebrows and the area around the eyes is necessary. The examination should include checks for: 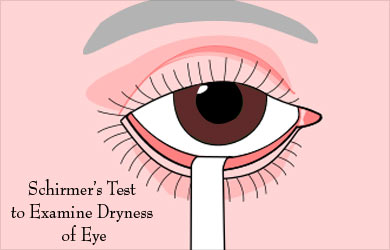 How is Blepharoplasty done?

During blepharoplasty, excessive fat and/or skin is excised and the lax muscle is tightened. Surgery can be carried out on both the upper and lower eyelids at the same time.

A detailed discussion should be carried out with the patient to set expectations regarding the final outcome of the procedure. Blepharoplasty is done with local anesthesia though general anesthesia may be given if the patient is not comfortable, or an additional procedure is planned in the same sitting.

For the upper eyelid, initially markings are made above the eye in sitting position to indicate the amount of skin that needs to cut off. During the procedure, the skin is cut along the markings with either a blade or radiofrequency monopolar cautery. The lower end of the incision is made in the upper eyelid crease so that the scar is not obvious. Fat may be excised and repositioned during the procedure. The skin incision is closed with sutures or cyanoacrylate glue.

Surgery for the lower eyelid can be carried out either through the conjunctiva or through the skin. During the transconjunctival approach, the excess fat is removed from the baggy lower eyelids. Skin changes are corrected with additional rejuvenation techniques like laser resurfacing and chemical peels. When the approach is through the skin, the incision is made just below the lower eyelashes. The excess fat is removed, and the remaining fat is adjusted to re-contour the area. The excess skin is also trimmed off. Tightening of the orbicularis oculi muscle and of the orbital septum may also be done during the procedure.

What Precautions should be taken following the surgery?

Complete recovery from the procedure may take a couple of weeks. After the surgery, the patient is advised to apply ice packs and a local antibiotic to the wound. Some bruising is expected after the surgery. If non-absorbable skin sutures are used, they need to be removed 6 to 7 days after surgery. Contact lenses should not be used for 2 weeks after the surgery. Bending or lifting heavy weights should be avoided.

What are the Complications of Blepharoplasty?

Dissatisfaction of the patient is the most common problem that the surgeon encounters if the expectations of the patient have not been set prior to the procedure. Complications that may occur due to the blepharoplasty procedure are: 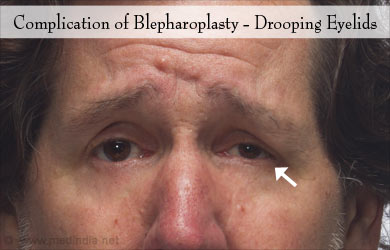 Brow Lift Cosmetic Surgery
Brow lift or forehead lift surgery is a wrinkles treatment procedure to tighten the sagging tissues of the forehead and upper eyelids. This procedure is done to restore a youthful contour to the face. Endoscopic brow lift, Temporal incision brow ...

Face Lift / Rhytidectomy
Rhytidectomy is an operation that is normally performed by plastic or cosmetic surgeons who work on the skin and muscles of the face and neck to iron out the wrinkles and creases.

Eyelid Bump | Eyelid Swelling - Symptom Evaluation
Our eyelids protect our eyes and keep them moist. Swelling of the eyelid may be localized due to chalazion, stye etc., or it could be a generalized swelling due to edema of the eye.

Eyelid Problems
Eye lid problems are one of the commonest complaints with which a patient presents to an eye doctor. Commonest among them being: blepharitis, chalazion and stye.

Quality of Life for Patients may Improve With Cosmetic Eyelid Surgery
Quality of life in patients with droopy eyelids can be improved by cosmetic surgery known as blepharoplasty.

Plastic Surgery and Procedures - Surgical Procedure
Plastic surgery is often portrayed as a branch of medicine that caters to our vanity, but it has a lot more to offer. Plastic surgery procedures are vital to numerous medical treatments today.

Chinese Teens Getting Under the Scalpel for Enhanced Looks!
According to a new Chinese research, a large number of Chinese middle school students are undergoing cosmetic surgery this summer vacation.

Failed Cosmetic Surgery Brought to Court
Marilyn Leisz has been awarded US$115,000 in compensation for a failed cosmetic surgery that has made it impossible to close her eyes.

Test Your Knowledge About Chromosomes?
View all