Medindia » Lifestyle and Wellness » Common Lifestyle Habits that Cause Diseases

Written by Shaun DMello, B.A.
Medically Reviewed by The Medindia Medical Review Team  on May 06, 2019

What are Lifestyle Diseases?

"Motivation is what gets you started. Habit is what keeps you going." - Jim Rohn

Lifestyle diseases are symptomatic of everything that is wrong with todays lifestyle. Although the term was once used interchangeably with longevity diseases, this no longer holds true, as lifestyle diseases are no longer age specific. Diseases that are linked with lifestyle choices such as those caused primarily by the consumption of junk food and processed food, lack of physical activity, work stress and other factors have now begun to affect young adults and children as well.

While urbanization and progress have brought about tremendous improvements in health care and the general standards of living, the pressures of sustaining these standards do take a toll on us. As we struggle to cope with the pressures of work and survival today, we often compromise on the diet, exercise, rest and relaxation, making convenient but poor choices. Consequently, while the toll from infectious diseases like tuberculosis, influenza and smallpox has greatly reduced, lifestyle diseases like diabetes and atherosclerosis have seen a dramatic rise.

According to the World Health Organization (WHO), the entire world is moving towards public health disaster as approximately 16 million people annually fall victim to lifestyle diseases prematurely. Just in 2012, non-communicable diseases were responsible for the deaths of 38 million people worldwide, with 16 million of its victims being under the age of 70. The need for public awareness isnt stressed enough, but is important because lifestyle diseases are also the most easiest to prevent. Simply modifying your lifestyle to eliminate and reduce risks can make a huge difference.

Factors responsible for such diseases:

Poor eating habits and food choices greatly increase the risk of lifestyle diseases like cancer, heart disease, diabetes and various other health conditions. Poor eating habits can include the over-consumption of certain foods, dietary deficiencies and excessive intake of saturated fats and refined or processed foods. This affects people at both ends of the socio-economic spectrum, with different types of diseases affecting both people. While developed nations and the urban population tend to follow diets that are high in calories with saturated fats, red meats and other junk food, they fail to follow a diet that can often include whole foods and fresh produce including fruits, vegetables and cereals.

Affluent and developed societies have diets characterized by high salt intake, increased consumption of fat and sugar and animal products. Another common problem faced with urbanization and development is an increase in the prices of fresh produce and products like organic fruits and vegetables, while refined and processed foods are cheap and widely available. To cope with high-pressure jobs and the fastpaced lifestyle, people living in cities tend to make choices of convenience when it comes to food. 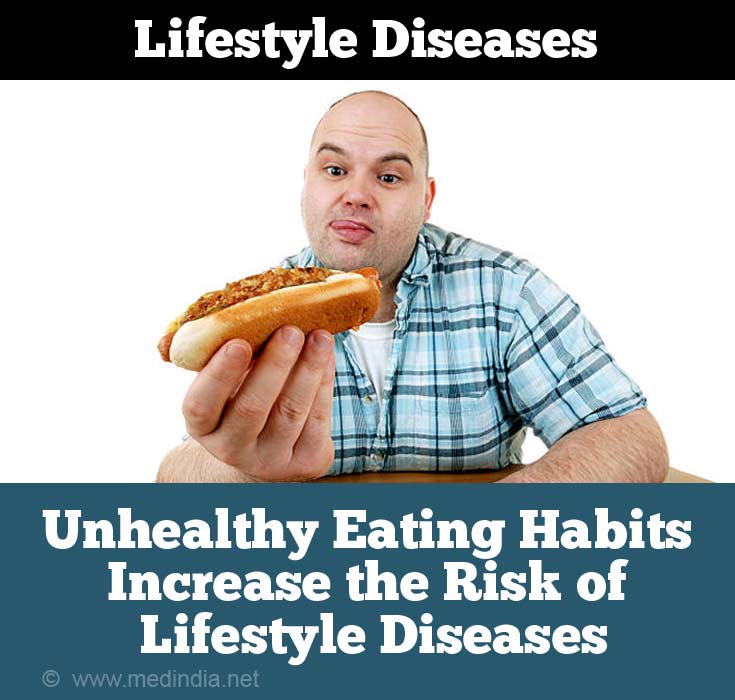 A sedentary lifestyle is one of the distinctive features of urbanization, development and progress. Almost all inhabitants of cities are engaged in occupations that require little physical activity and most dont even permit much time to engage in any physical activity. This is a huge contributing factor to the rise of lifestyle diseases and chronic conditions like hypertension, high cholesterol and it can subsequently lead to problems with obesity, heart disease, diabetes, strokes, and so on. It can also increase levels of stress and anxiety and raise the risk of suffering from various other health conditions.

This is clearly reflected from studies on physical activity of populations in Sub-Saharan Africa. Chronic diseases are rare in the region because of the high levels of physical activity. The fast pace of urbanization across the continent has not surprisingly coincided with a rise in chronic lifestyle diseases. While rural populations commute by walking and engaging in physical activities like chopping wood or tilling fields, urban populations spend most time indoor either in offices or at home. Also, public transport and automobiles are used for commuting. In poorer districts where safety is a concern, people spend even less time outdoors and instead watch television at home.

Obesity has become one of the greatest problems of modern society as it greatly increases the risk of numerous health conditions from diabetes and hypertension to sleep apnea, osteoarthritis, lower back pain and gallbladder disease. Obesity is also closely associated with cancer, coronary artery disease and overall diminishes life expectancy. While your Body Mass Index or (BMI) is normally used to calculate the extent of body fat and the extent of obesity, the risk is also affected by your distribution of fat. Abdominal fat poses the highest risk and is also referred to as central obesity. Central obesity greatly increases the risk of lifestyle diseases early in life with conditions like raised insulin, high blood pressure high triglyceride levels and high cholesterol levels even affecting young adults.

As is the case with almost all lifestyle disease risk factors, this is part of a vicious cycle, exacerbated by poor eating habits, a sedentary lifestyle and other conditions.

Stress doesnt just affect us emotionally or mentally, it also has a clear physical effect as it aggravates and increases the risk of conditions like obesity, cardiac disease, diabetes, asthma, Alzheimers disease, rapid aging and gastrointestinal problems. Stress and anxiety can also affect ones ability to relax and get proper sleep, contributing to a further deterioration in health and a host of other problems. Stress doesnt refer to the one that affects us from time to time due to the high-pressure situations at work or home, but it refers to frequent and constant stress. This is a common problem for most urban populations because of the highly competitive job market, education system, high-pressure jobs, the lack of time and other factors that make schools and careers highly stressful. This spills over into personal life as well as individuals struggle to balance personal and professional lives while navigating through the emotional roller coaster of human relationships. The combination of work, relationship and financial stress can often be so overwhelming that people tend to withdraw completely, shunning social contact and sinking further into depression. Chronic depression poses even greater risks to ones health and this problem often goes hand in hand with other unhealthy habits like comfort eating, which contributes to the problem of unhealthy eating, as well as a lack of physical activity. All of these add to the problem of obesity. Obesity in turn further spirals depression because of the resultant poor body image. 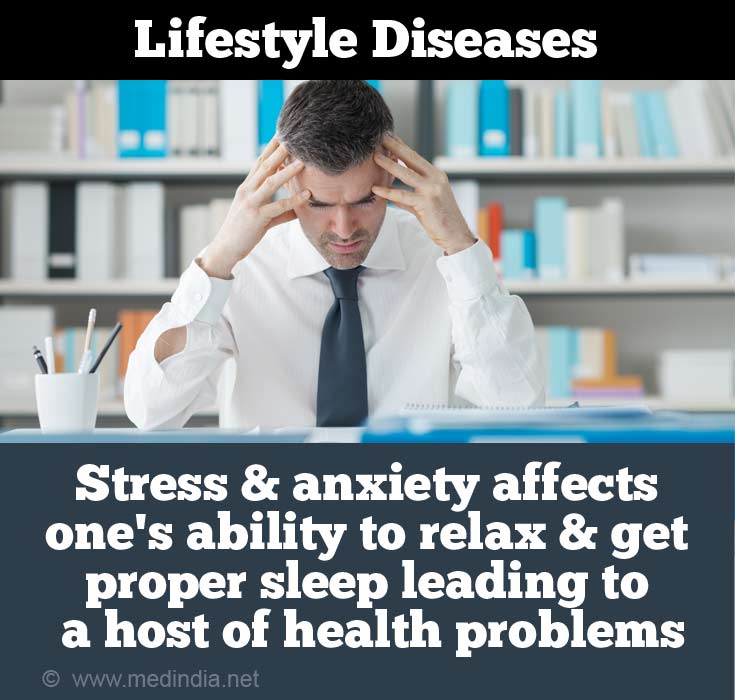 Sleep is one of the most neglected requirements for human health and well-being. Several studies have clearly indicated the importance of sleep in terms of both quantity and quality for general health as it affects various metabolic, endocrine and neurological functions of the body. Sleep deprivation, whether through a lack of sufficient sleep or interrupted and poor quality sleep significantly increases the risk of hypertension, heart disease, elevated cholesterol and triglyceride levels, obesity, sleep apnea and a number of other health conditions.

Poor sleeping habits can also affect growth and development in infants and children. Sleep disorders, when ignored or untreated can start to affect mood and behavioral patterns thereby taking a toll on work and family relationships. This doesnt just affect productivity and physical health, but it also can cause depression and social disorders.

Although there is a decline in the prevalence of smoking globally over the past few years due to concerted global efforts to counter the problem, smoking still poses a huge public health risk. Additionally, despite the decline in prevalence, the number of smokers has risen because of population growth. Smoking is one of the biggest public health problems because of the high risk it poses. Smoking is associated with various lifestyle diseases such as numerous respiratory disorders like bronchitis and asthma, lung cancer, oral cancer and other cancers, cardiovascular diseases, strokes and numerous other health conditions.

It is estimated that around half of all smokers will contract some smoking related lifestyle disorder that will prove fatal. According to a report published in 2007, nearly 5 million fatalities a year were attributed to smoking. Whats troubling is that passive smoking can pose just as big a threat to non-smokers, leaving those in prolonged and close proximity to cigarette smoke just as vulnerable to smoking related lifestyle diseases.

While the consumption of alcohol in moderation does not pose any significant health risk and if consumed appropriately can even offer some health benefits. However excessive consumption of alcohol can be a major contributing factor in the development of lifestyle diseases. The protective effect of moderate wine consumption against heart disease is often used as an excuse to overindulge. Excessive alcohol consumption increases HDL levels, risk of heart disease, colorectal and breast cancer, hypertension and diabetes. It also contributes to the development of various other lifestyle diseases and conditions like GERD (Gastroesophageal Reflux Disease) and liver cirrhosis.

Individuals who cannot moderate alcohol intake are advised to abstain from alcohol altogether as in such cases the risks far outweigh any possible benefits. 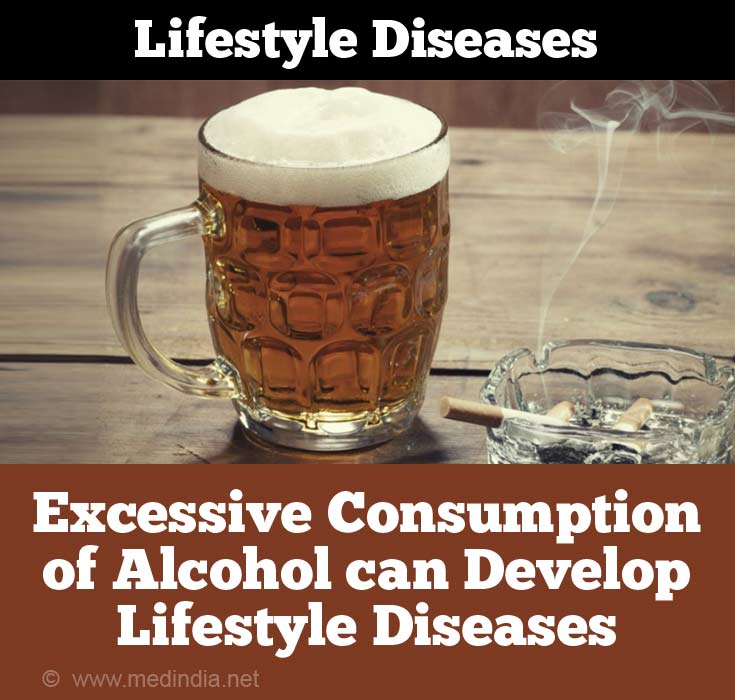 Latest Publications and Research on Common Lifestyle Habits that Cause Diseases

Lifestyle Paths to Heart Disease
Heart disease can be of many types depending upon whether they involve the heart muscles or artery walls or heart beats. Bad lifestyle choices contribute to heart disease.

Diabesity
With more than one billion people affected, diabesity is the largest epidemic in the world today. Fortunately it can be reversed with lifestyle changes.