They're refreshing, freely available, and inexpensive. Though colas have been criticized as being unhealthy for all age groups, most people tend to fall victims to cola cravings sometime or the other. 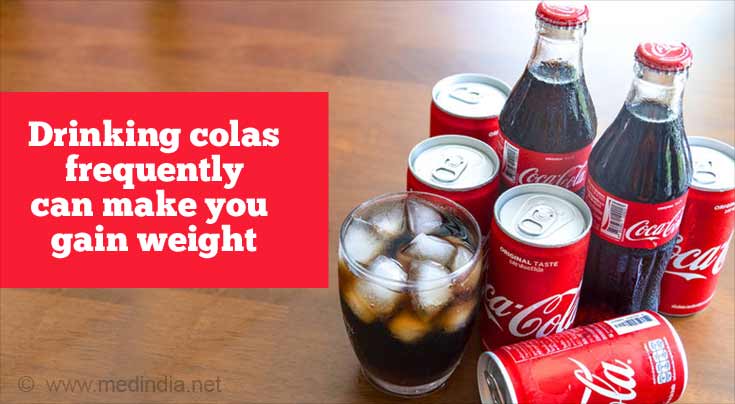 Drinking cola occasionally is not damaging, but their frequent and long-term consumption makes one put on weight. They have also come under scrutiny for their contribution to the development of type 2 diabetes and other chronic conditions.

Diet soft drinks made with artificial sweeteners are the chosen alternative for people who dont want to put on calories with ordinary colas. However, experts say that they are not the best alternative to regular soft drinks.

All said and done, carbonated beverages contain carbon dioxide mixed with the drink under pressure. This gives the fizz to the drink. Carbon dioxide is the end product of metabolism which the body tries to throw out. It is just not possible to remain healthy by ingesting this gas. A good amount of this gas gets absorbed in the blood making it acidic. For good health, the body needs an alkaline environment.

Nowadays, there is much discussion about how to prevent an acidic environment in the body, nourish the body with foods that produce alkaline ash and help to keep it in the alkaline state.

This concept is still controversial, but does not rule out the fact that alkaline ash forming foods like milk, fruits, vegetables, nuts, aloe vera, wheat grass, sprouts, alkaline water, are much more stomach friendly and feel-good foods over meat, sugar-laden sweets, beverages, and fats, which eventually make the body acidic.

The blood always tends to maintain a slightly alkaline pH. Soft drinks have a very low pH due to the presence of carbon dioxide, which on mixing with water forms carbonic acid. They also have inorganic phosphates and sugars, contributing to an extremely low pH. Their frequent consumption over a long time could precipitate the ill-effects of extreme acidity of the body.

To balance the extra acidity, alkaline minerals like calcium and magnesium leach out from the body reserves  from bones, teeth, and muscles. High concentration of sugar in soft drinks causes the pancreas to produce more and more insulin. Frequent fluctuations in insulin and blood sugar levels lead to diabetes and other imbalances in the body. Excess sugar intake also causes an increase in fat levels. 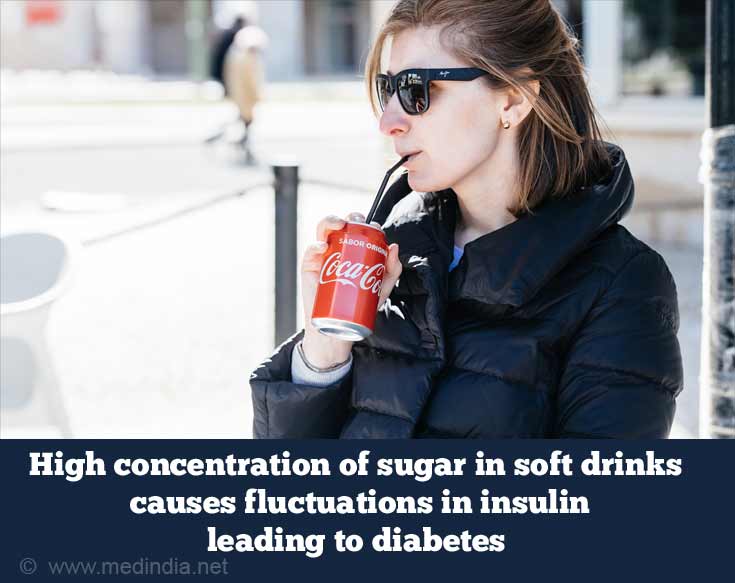 When the pH of the body becomes too acidic, it leads to low energy, fatigue, excess weight, poor digestion, aches and pains, and a weak body with low immunity in the long run.

Regular soft drinks generally contain 10.6 grams of sugar and 41 calories per 100ml. A 330 ml can, in that case, would contain 34.9 grams of simple sugar. This content would add up to give 175 calories each time that a can is consumed.

If the frequency of consumption is at least twice a week, then one would consume an extra 350 calories minus any other nutrient every week. This would eventually lead to a gain of 1.2 kilograms in six months only from the cola consumed.

What does this mean?

Sugary soda laden beverages can actually cause a lot of harm if consumed habitually. These are refreshment drinks, which are supposed to be consumed occasionally and not made a way of life. The problem remains that soft drinks tend to become a habit/addiction with people.

Diet colas, on the contrary, contain no sugar and only 0.41 calories per 100 ml. Here, carbonation and the artificial sweetener are the main culprits that bloat up an individual.

Research work done on artificially sweetened foods suggest that sweet-tasting soft drinks, regardless of whether they are sweetened with sugar or a calorie-free sugar substitute, might stimulate or increase cravings for other sweet, high-carbohydrate foods. Although the findings are not conclusive, there is much evidence to suggest that regular use of artificial sweeteners may promote weight gain. Diet soda may not be the best replacement for sugary soda.

What Do the Diet Colas Contain?

It is an artificial sweetener which is 200 times sweeter than sugar. The US Food and Drug Administration approves its usage as a food additive, but it may have ill-effects on the body.

This is a permitted class II preservative.

This is an artificial sweetener used as a substitute for sugar in many foods. Studies have linked aspartame to brain tumors in animals, so it should be avoided by children and pregnant women.

This acts as an acidity regulator, to maintain the alkaline or acidic levels of foods.

This is a permitted natural color used in a variety of foods.

Caffeine stimulates the central nervous system. It is a diuretic and tends to increase the rate of urination.

Commonly known as soda and it is regular water mixed with carbon dioxide.

Colas give people a temporary high and the feeling of fullness. They somehow shut off the hunger signals. However, this is the short-lived, misleading sensation. Also, colas increase the craving for high caloric foods like a burger, pizza, creamy sandwiches, and noodles.

Also, the body doesn't seem to register fluid calories as it does those absorbed from solid food. This means they are added on top of calories from the rest of the diet. Their indiscriminate use leaves the body drained of all nutrition.

Study Says Drinking 2 Cans of Soft Drinks a Day can Damage Your Body in 3 Weeks Drinking two cans of fizzy pop a day could increase the chance of developing heart disease and diabetes in three weeks, says a new study.

Diet Cola- No Comfort For Ailing Hearts According to NRI researchers working in Boston, the link between sodas and heart diseases persist, regardless of whether they are diet or regular ones.

Soft Drinks Increase Blood Pressure Risk: Study A new study has revealed that soda and other sugar-sweetened beverages such as fruit drinks are associated with higher blood pressure levels in adults.

Cola Drinks Cause Cancer? The Center for Science in the Public Interest (CSPI), a US consumer advocacy group declared that popular soft drinks and beverages contain chemicals that cause cancer.

Soft Drinks - Are They Safe? Soft drinks like cigarettes and alcohol are harmful to health and should be avoided.