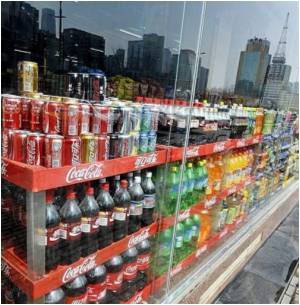 A new study has revealed that soda and other sugar-sweetened beverages such as fruit drinks are associated with higher blood pressure levels in adults.

In the International Study of Macro/Micronutrients and Blood Pressure (INTERMAP), for every extra sugar-sweetened beverage drunk per day participants on average had significantly higher systolic blood pressure by 1.6 millimeters of mercury (mm Hg) and diastolic blood pressure higher by 0.8 mm Hg. This remained statistically significant even after adjusting for differences in body mass, researchers said.

It stealthily creeps in and catches people unawares. Find out more about this 'silent killer' by participating in the quiz.
Advertisement

Researchers found higher blood pressure levels in individuals who consumed more glucose and fructose, both sweeteners that are found in high-fructose corn syrup, the most common sugar sweetener used by the beverage industry.


Higher blood pressure was more pronounced in people who consumed high levels of both sugar and sodium. They found no consistent association between diet soda intake and blood pressure levels. Those who drank diet soda had higher mean BMI than those who did not and lower levels of physical activity.

Drug intervention need not be the only option to help lower your moderately high blood pressure. Lifestyle changes along with herb remedies such as garlic, arjuna, sarpagandha, and olive can serve the purpose.
Advertisement
"This points to another possible intervention to lower blood pressure," said Paul Elliott, senior author and professor in the Department of Epidemiology and Biostatistics in the School of Public Health at Imperial College London.

"These findings lend support for recommendations to reduce the intake of sugar-sweetened beverages, as well as added sugars and sodium in an effort to reduce blood pressure and improve cardiovascular health."

In INTERMAP, researchers analyzed consumption of sugar-sweetened drinks, sugars and diet beverages in 2,696 participants, 40- to 59-years-old, in eight areas of the United States and two areas of the United Kingdom. Participants reported what they ate and drank for four days via in depth interviews administered by trained observers, underwent two 24-hour urine collections, eight blood pressure readings and responded a detailed questionnaire on lifestyle, medical and social factors.

The researchers found that sugar intake in the form of glucose, fructose and sucrose was highest in those consuming more than one sugar-sweetened beverage daily. They also found that individuals consuming more than one serving per day of sugar-sweetened beverages consumed more calories than those who didn't, with average energy intake of more than 397 calories per day.

Those who did not consume sugar-sweetened beverages had lower average body mass index (BMI) than those who consumed more than one of these drinks daily.

"People who drink a lot of sugar-sweetened beverages appear to have less healthy diets," said Ian Brown, Ph.D., research associate at Imperial College London. "They are consuming empty calories without the nutritional benefits of real food. They consume less potassium, magnesium and calcium.

"One possible mechanism for sugar-sweetened beverages and fructose increasing blood pressure levels is a resultant increase in the level of uric acid in the blood that may in turn lower the nitric oxide required to keep the blood vessels dilated. Sugar consumption also has been linked to enhanced sympathetic nervous system activity and sodium retention."

The study's limitations include that it was cross-sectional and diet was self-reported.

"This is a population study. It's one piece of the evidence in a jigsaw puzzle that needs to be completed," Brown said. "In the meantime, people who want to drink sugar-sweetened beverages should do so only in moderation."

The study has been reported in Hypertension: Journal of the American Heart Association.