Your Body Posture Shows What You Think Of Yourself

Body posture not only affects what others think about you, but it also gives you more confidence in your own thoughts, says a new study.

In the study, published in the October 2009 issue of the European Journal of Social Psychology, researchers found that people who were told to sit up straight were more likely to believe thoughts they wrote down while in that posture concerning whether they were qualified for a job.

On the other hand, those who were slumped over their desks were less likely to accept these written-down feelings about their own qualifications.


Richard Petty, co-author of the study and professor of psychology at Ohio State University, said: "Most of us were taught that sitting up straight gives a good impression to other people. But it turns out that our posture can also affect how we think about ourselves. If you sit up straight, you end up convincing yourself by the posture you're in."

Petty conducted the study with Pablo Briñol, a former postdoctoral fellow at Ohio State now at the Universidad Autónoma de Madrid in Spain, and Benjamin Wagner, a current graduate student at Ohio State.

The study included 71 students at Ohio State. When they entered the lab for the experiment, the participants were told they would be taking part in two separate studies at the same time, one organized by the business school and one by the arts school.

They were told the arts study was examining factors contributing to people's acting abilities, in this case, the ability to maintain a specific posture while engaging in other activities. They were seated at a computer terminal and instructed to either "sit up straight" and "push out [their] chest]" or "sit slouched forward" with their "face looking at [their] knees."

While in one of these positions, students participated in the business study, which supposedly investigated factors contributing to job satisfaction and professional performance.

While holding their posture, students listed either three positive or three negative personal traits relating to future professional performance on the job.

After completing this task, the students took a survey in which they rated themselves on how well they would do as a future professional employee.

How the students rated themselves as future professionals depended on which posture they held as they wrote the positive or negative traits.

"Their confident, upright posture gave them more confidence in their own thoughts, whether they were positive or negative," Petty said.

However, students who assumed the slumped over, less confident posture, didn't seem convinced by their own thoughts - their ratings didn't differ much regardless of whether they wrote positive or negative things about themselves.

In a separate experiment, the researchers repeated the same scenario with a different group of students, but asked them a series of questions afterwards about how they felt during the course of the study.

That suggests people's thoughts are influenced by their posture, even though they don't realize that is what's happening.

Premature Babies' Posture May Reveal Their IQ Levels: Study
A new study by Australian researchers has shown that postures adopted by young babies born prematurely are a powerful indicator of their intelligence later in life.
READ MORE

Expert Suggests 3 Simple Solutions To Improve Your Posture
A wrong body posture can predispose people towards aches and pain, but it's never too late to work towards correcting one's pose and keeping the spine healthy.
READ MORE

IPosture, A Revolutionary Devise To Straighten Up When You Slouch
You can now stop worrying about the way you look while sitting, for iPosture a small gadget, has come to your rescue.
READ MORE 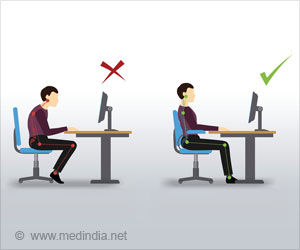