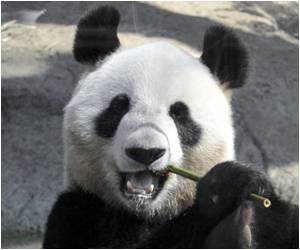 Chinese entrepreneur An Yanshi has found the key ingredient to produce the world's most expensive tea - panda poo.

The former calligraphy teacher has purchased 11 tonnes of excrement from a panda breeding centre to fertilise a tea crop in the mountains of Sichuan province in southwestern China, home to the black and white bears.

Daily drinking of three cups of black tea can help reduce the risk of heart attack by 60 percent and lower the threat of diabetes, according to experts.
Advertisement


Chinese tea drinkers regard the first batch of tea to be harvested in the early spring as the best and successive batches, regarded as inferior, will sell for around 20,000 yuan.

BBC has sparked controversy by naming a giant panda named Sweety among 12 females in its 'Faces of 2011' list.
Advertisement
The 41-year-old, who is so passionate about his new project he dressed in a panda suit for his interview with AFP, has been ridiculed by some in China for his extravagant claims of the potential health benefits of the tea.

But he insists he is deadly serious, saying he quit his job at Sichuan University to throw himself "heart and soul" into his company, Panda Tea, whose logo features a smiling panda wearing a bow tie and holding a steaming glass of green tea.

While An hopes to make money from the tea, which he has planted on just over a hectare (2.5 acres) of land, his main mission is to convince the world to protect the environment and replace chemical fertilisers with animal faeces -- before it is too late.

"Panda dung is rich in nutrition... and should be much better than chemical fertilisers," An told AFP, as he sat at a traditional Chinese tea table drinking tea grown with cow manure.

"People should make a harmonious relationship with heaven, earth and the environment," An said.

"Everybody has an obligation to protect the environment," he added, as he showed AFP dozens of traditional Chinese scroll paintings that he has created of cheerful-looking pandas, bamboo and calligraphy.

The tea aficionado got the idea to use panda faeces as fertiliser after attending a seminar last year where he discovered that the bears absorbed less than 30 percent of the bamboo they consumed, excreting the remaining 70 percent.

An showed AFP a glass jar of fresh-looking panda faeces, which he uses to fertilise two tea plants in his office, noting the "quality" and "green" colour of the dung.

He is so convinced that Panda Tea will be a hit that he has patented the idea to prevent a competitor stealing it -- a common occurrence in a country where laws protecting intellectual property rights are often flouted.

His claim that the green tea will help people lose weight and protect them from radiation has been ridiculed by some Chinese web users, who have expressed doubts about the purported health benefits of the tea and the high asking price for the first harvest.

"If it is such a good fertiliser for tea plants, I want to ask this teacher: why don't you just eat panda dung? Then you can get the rest of the 70 percent nutrition," a web user called Baihuashu said.

Despite the online detractors of his yet-to-be-tested tea, An said he remained undeterred and was already thinking about expanding his business.

"After the first batch is harvested, if the quality is really good, we will expand the economies of scale," said An, waving his panda paws for emphasis.

Among individuals 65 years and older, as many as 30 percent have aortic valve sclerosis or stenosis and as a result of their deteriorating health, they cannot enjoy a normal lifestyle.
Advertisement
<< Survey Says 7 in 10 Brits are Bullied in Their Jobs
Fossil Skulls Assembled to Recreate Faces of Our 7-Million-Y... >>

Watery Eyes
News Archive
News Resource
Advertisement
News Category
Parents are 'Winging It' on Their Kids' Mobile Use Ankle and Ankle Movements While Riding an Hoverboard Is It Healthy to Let Your Mind Wander? Walk Till it Hurts: Good News for Peripheral Artery Disease Patients Plus Size Models and Social Media: Where Do They Fit In?
More News
Sign up for Wellness Consult a Doctor Sign up for Selfcare

Drug Side Effects Calculator Diaphragmatic Hernia Iron Intake Calculator Nutam (400mg) (Piracetam) The Essence of Yoga Sinopril (2mg) (Lacidipine) Accident and Trauma Care Noscaphene (Noscapine) Turmeric Powder - Health Benefits, Uses & Side Effects Blood Pressure Calculator
This site uses cookies to deliver our services. By using our site, you acknowledge that you have read and understand our Cookie Policy, Privacy Policy, and our Terms of Use