World Bank: Economic Losses Due to Lack of Sanitation Amount to $260 Bln a Year Globally 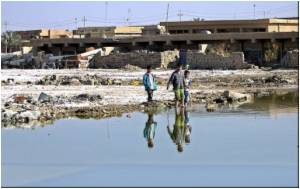 The World Bank said that one out of every three people in the world today have no toilet. Economic losses from lack of access to sanitation, amount to an estimated 260 billion dollars annually, more than the entire gross domestic product of Chile.

Without proper toilets or sewage systems, many people in developing countries go to the bathroom in rivers or fields, unknowingly spreading germs that cause diarrheal disease - the second leading cause of death in children under five - in their own communities, as well as those downstream.

"We have to fix sanitation if we want to end extreme poverty by 2030 and boost the incomes of the poorest 40 percent," said World Bank President Jim Yong Kim. "From my background in health, I know well the magnitude of the problem. This is an absolutely critical intervention. The impact of inadequate sanitation lies at the core of so many barriers to prosperity faced by poor people - health, education, environment, wealth, equity, and dignity. The return on investment is high, especially for the poor."


Diarrheal disease kills thousands of children each day. Children who survive often miss school due to illness. Having no access to sanitation renders women and girls particularly vulnerable, as they risk personal security seeking private locations, or drop out of school at puberty as there are no sanitation facilities.
Advertisement
Poor sanitation also leads to costs valued in the hundreds of billions of dollars every year by damaging health, environment, and tourism.

"We support the effort for access to proper sanitation by 2025 for everyone," Kim said. "We can achieve this goal and transform the lives of billions of people over the next several years. It will take real commitment and action from the heads of state of our client countries, as well as collaboration with all of our partners in civil society and the private sector. We can do this." To achieve this goal, the World Bank will:

Take a global leadership role to advocate that countries make the required investments to meet their sanitation targets and eliminate open defecation, which affects the poorest 40 percent in these countries.

Work with domestic and global private sector and other partners to scale up efforts to meet demand from households and communities for sanitation products and services, moving from open defecation to improved latrines to improved waste management

Work closely with countries where open defecation is most prevalent to ensure that the World Bank's lending and evidence-based knowledge is supporting improved sanitation service delivery, such as through effective monitoring and use of data.

The announcement coincides with a World Bank-IMF Spring meetings side event on investing in sanitation and on the heels of a call by Deputy Secretary-General of the UN Jan Eliasson last month to end open defecation by 2025.

"I am determined to mobilize major players, on behalf of the UN Secretary-General, to boost sanitation efforts and end open defecation by 2025," said Eliasson. "I applaud the World Bank's commitment in this area, and look forward to working closely with the World Bank as part of the partnership between our organizations.

We have less than 1,000 days of action before the 2015 target date for the Millennium

Development Goals. While we have made great improvements towards all the Goals, sanitation is the target where we have made least progress, and we urgently need to scale up investment. This is an issue of fundamental human dignity, and the health of people and the environment. "

"Poor sanitation is often ignored because people don't like to talk about it, much less act on it, " said Rachel Kyte, Vice President of Sustainable Development at the World Bank. "But poor sanitation is a major cause of diarrheal disease and there is increasing evidence of its link to childhood stunting, which deprives the poorest and most vulnerable from opportunities for a better life. It's time to act."

The side event on sanitation also included discussion by Jim McHale, Senior Vice President at American Standard of a US$1.50 toilet, affordable for many of the world's poor, designed by one of the world's largest producers of toilets and bathroom fixtures.

The World Bank is exploring ways of scaling up access to sanitation through new kinds of partners, such as software developers, to learn how new technology-enabled mobile phone applications can address sanitation sector needs. It is widely reported that more people in the developing world have access to cell phones than to toilets.

Today, the World Bank awarded the three grand prize winners of the Sanitation Hackathon and App Challenge. In December 2012, the World Bank hosted the first ever global competition to apply state of the art thinking in how to use software applications to help governments, private sector, and households improve sanitation service delivery.

New Report on Water, Sanitation and Hygiene Released by WHO
Safer Water for Better Health is the first-ever report providing country-by-country estimates of ......