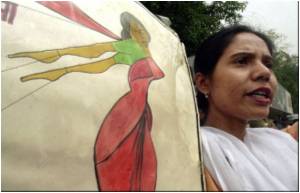 Researchers say that gender discrimination is a major reason women choose to pursue careers in biology rather than physics.

The study by researchers from new research from Rice University reveals differences in the way male and female scientists view disparities in the proportion of women in some science disciplines.

Researchers have said that even in today's times, gender discrimination at workplace is very much alive and kicking.
Advertisement

They surveyed 2,500 biologists and physicists at 30 elite institutions of higher education in the United States and also interviewed a smaller scientific sample of 150 scientists one on one about the reasons they believe there are gender differences in scientific disciplines.

Discrimination against women has sparked a heated debate in Israel.
Advertisement
"In our research, we're interested in how scientists explain the different proportions of men and women in biology and physics.

"We know from various pieces of research that people's perceptions of the way things are really influence how they act with other people.

"When mentoring students, they might pass these views along. This makes their opinions extremely important, as they can have a significant impact on future scientists and research," she said.

The key findings of the study are that both male and female scientists view gender discrimination as a factor in women's decision not to choose a science career at all or to choose biology over physics. However, the two sexes still have differences in opinion about when discrimination occurs.

"However, female scientists believe that discrimination is still occurring in present-day universities and departments," she said.

Regardless of gender or discipline, approximately half of all the scientists interviewed thought that at some point in women's educational lives, they are discouraged from pursing a career in physics.

Other reasons scientists gave to explain the different numbers of women that pursue biology when compared with physics include mentorship of students in the fields of biology and physics and "inherent differences between men and women."

"I think women ... want to have more of a sense that what they are doing is helping somebody. Maybe there are more women in ... biology (because) you can be like, 'Oh, I am going to go cure cancer'," one female scientist said.

"It's extremely important to understand how scientists at the kind of top research universities we studied feel about this topic, as they train the next generation of researchers and leaders in the sciences and will pass on their ideas to these young scholars," Ecklund added.

The study has been recently published in Gender and Society.

Two southern African states -- South Africa and Lesotho -- have leapt into top 10 ranking of countries where women face the least discrimination, the World Economic Forum said Tuesday.
Advertisement
<< Hunger and Intake of Calories Amplified By Changes in Sleep...
Simple Intervention Used By U of A Medical Researchers to I... >>

Gender and Age Discrimination Faced By 50-plus Brit Women