With Its Sack of Michelin Stars, Copenhagen a Surprise Culinary Superstar 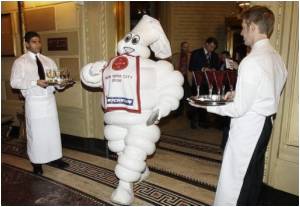 With 13 Michelin stars to its name and a restaurant recently crowned the best in the world, Copenhagen has become a surprise must for Europe's gastronomical pilgrims and a culinary trend-setter.

Up until a few decades ago, not many would have predicted that the small capital of Denmark would become synonymous with refined and exquisite cuisine.

The Michelin Guide is being designed to include three more Japanese cities, according to publishers of the French food guide.
Advertisement

Traditionally, the cooking has been heavy and Germanic, dominated by pork and syrupy brown gravies and an obligatory side of boiled potatoes.


But in the past 25 years Copenhagen has metamorphosed into a creative gastronomical Mecca, each year drawing thousands of amateur and professional food critics alike.

A 32-year-old French chef who serves tea to match her Chinese-themed dishes won a precious star in the latest edition of France's prestigious Michelin restaurant guide released on Monday.
Advertisement
"What is exceptional is that a country of 5.5 million inhabitants in a region not known for its gastronomy in previous decades has become a barometer of global trends," food critic Adam Price marveled.

Another kudo came earlier this month when the prestigious Bocus d'Or Europe prize went to Danish chef Rasmus Kofoed from the one-star Copenhagen restaurant Geranium, which shut in 2009 because of financial problems.

"They have become fine gourmets who are much more interested in wine and local produce than their Nordic neighbours, where food import regulations are stricter," he explained.

Since the 1990s, the Danish capital has counted "a large number of gourmet restaurants," Letz said, adding that "the plethora is disproportionate to the number of inhabitants."

These fine-dining eateries are flourishing and Copenhagen now counts the most stars for a city in northern Europe and more than Rome, Milan or Madrid.

And Noma is considered the jewel in Copenhagen's crown.

Headed by 32-year-old chef Rene Redzepi, the restaurant launched in 2004 has all but reinvented Nordic cuisine by returning to traditional roots while experimenting with unexpected produce.

Some critics go so far as to compare it to the Dogme 95 avant-garde and purist film movement -- led by directors like Lars von Trier and Thomas Vinterberg -- that put Denmark on the international cinema radar.

Just as the Dogme 95 films were free of spectacular special effects, post-production modifications and other gimmicks, Redzepi has vowed to develop a pure cuisine "based 100 percent on (Denmark's) own local products and seasons".

The young chef, whose restaurant is in an 18th-century warehouse at Copenhagen port, insisted that he is only "rediscovering products used more than 100 years ago and preparing them in a different way."

"We continue to seek out new products and are planning to put beaver meat and seagull eggs on the menu," he said, pointing out that "a lot of the products that we put on the table today and that we consider exotic are part of our culinary history over recent centuries."

Despite his success, Redzepi remains a realist.

"When it comes to a question of taste, there is no absolute truth," he said. And while he is proud his restaurant tops international lists, "you really can't be the best in the world in our business."

His approach initially drew sarcastic comments. "Will they ask us to eat seal fat and black radishes and call it haute cuisine?" once wrote the daily Politiken, quoting sceptics from the culinary world.

Not all find the restaurant to their liking.

The global financial crisis has also hit Copenhagen's high-end eateries. It is "luxury that takes the first blow," said Kreiner.

The restaurant at The Dorchester Hotel in London owned by French chef Alain Ducasse, has now earned the three Michelin stars and has made it to the elite club.
Advertisement
Advertisement
This site uses cookies to deliver our services.By using our site, you acknowledge that you have read and understand our Cookie Policy, Privacy Policy, and our Terms of Use  Ok, Got it. Close
×