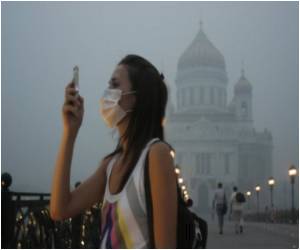 Experts are warning that the concentration of toxic particles from a heavy smog from the wildfires burning around Moscow has reached dangerous levels.

Visibility in the city centre was only 300 metres in the early morning, with the tops of the wedding-cake Stalin-era skyscrapers and the golden onion domes of churches invisible from a distance.

The situation in the outlying suburbs was even worse with visibility no better than 20 metres in some areas in the eastern region, the RIA Novosti news agency reported. However the capital's airports were working normally.


The smell of smoke could even be detected inside the metro and office buildings, AFP correspondents said.

"Overnight the peak readings reached the critical level at which people need to take precautionary levels for the sake of their health," said Alexei Popikov, head of the Moscow pollution watchdog Mosekomonitoring.

Smoking causes many diseases and affects the overall health of smokers.
Advertisement
He told the Interfax news agency that people should avoid going out on the street and if they do they should wear multi-layered anti-pollution masks.

Russia's chief doctor Gennady Onishchenko meanwhile recommended a "minimum of physical activity. Leave all complicated and difficult tasks to one side."

He said it was particularly important to take care of the old and children.

Dozens of new wildfires hit the Moscow region in the past day as firefighters struggled to come to grips with the situation amid a relentless heatwave.

Forecasters warned that record temperatures were going to continue in the coming days, with no rain forecast and the mercury expected to hit 38 degrees Celsius (over 100 degrees Fahrenheit) in Moscow this week.

Russian media said that mortality rates in the Russian capital have increased over the past weeks due to the heatwave although the authorities have so far been reluctant to give any figures.

Television channel REN-TV smuggled a hidden camera into one hospital where a doctor said the number of deaths had multiplied by a factor of three.

"We cannot say that the mortality rate is increasing. Media who are saying this do not have reliable sources," a health ministry spokesman told AFP.

The emergencies ministry said it was engaged in dousing some 30 fires in Moscow Wednesday. The fires in the Moscow region have been caused not only by burning forests but also burning peat.

The ministry said it had carried out numerous overflights of the region with water bombing aircraft, chucking down a total of 1,540 tonnes of water.

An insight into the health insurance schemes and policies as promoted by the Government.
Advertisement
Advertisement