West Bank Women Have Chosen Embroidery To Make A Living!

In a village outside the West Bank town of Ramallah, Naama Asi embroiders dresses in her sparsely furnished home, that fetch hundreds of dollars from Palestinians scattered around the world.

The 48-year-old is not only able to support her aging father and mentally disabled brother, but to help keep alive an artistic tradition that stretches back generations and ties a far-flung diaspora to its homeland. 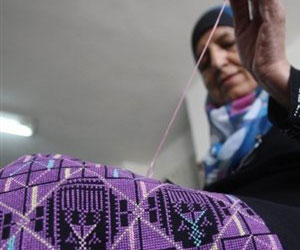 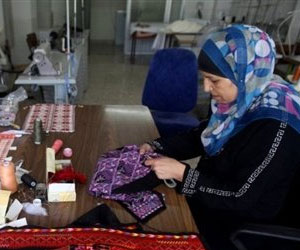 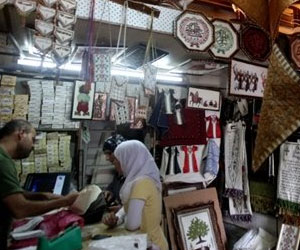 "By doing this work, which is part of our Palestinian heritage, I feel that women can renew our heritage and save it from extinction," Asi says as her calloused fingers rapidly thread the needle through a new dress.


In recent years Palestinian women in the Israeli-occupied West Bank have embraced traditional embroidery as a way to support their families while their husbands and male relatives have found it increasingly hard to find work.
Advertisement
A hand-embroidered dress will fetch between 1,200 and 1,500 dollars on the international market, and the women are typically paid around 300 dollars for the work, which is usually done over a period of one to two months, according to figures from a cooperative in the town of Al-Bireh near Ramallah.

Asi, who has been practicing her craft for more than 20 years, now teaches it to other young women at the cooperative, helping them to weave abstract and vaguely floral patterns out of colorful yarn, beads and golden coins.

Farida al-Amed, the cooperative's director, says embroidery provides not only a source of income but a creative avenue for the women, most of whom live in poor villages and refugee camps.

"The embroidery had opened the door for Palestinian women to provide a source of income for their families, especially since their husbands are unable to work because of the Israeli closures," she says.

Since the outbreak of the second Palestinian uprising in 2000, Israel has strictly limited the movement of Palestinians in the West Bank and greatly reduced the number of work permits for laborers to work in the Jewish state.

"The women have entered this line of work to fill the gap left by their husbands," Amed says. "Because they can do it inside the home it gives them a way to provide for their families."

The cooperative, which includes some 2,500 women, preaches self-sufficiency, with a prominent sign on the wall reading: "Woe to those who wear what they don't sew and eat what they don't grow."

The women cater largely to Palestinians in the diaspora, who seek out clothes and household items bearing the distinct embroidery of their homeland.

One of their customers, the Palestinian owner of a restaurant in the United States, has ordered a set of embroidered uniforms for his servers.

The cooperative also sells to foreigners living and working in the West Bank, and on a recent day Rija Ghazawna, 40, was sewing an embroidered tapestry bearing the logo of a Japanese firm with an office in Ramallah.

"The foreign companies are always asking for these tapestries," she says as she pulls the needle back before looping it through the fabric again.

Nearby, in downtown Ramallah, Suhail Shamaa, 40, hawks customers outside his shop, which specializes in locally-made handicrafts purchased from several nearby villages.

"The women enjoy doing it, especially since they spend so much time at home without work and without being able to go to recreational places," he says.

"The money they get for the embroidery does not compare to the great effort it takes, in terms of the number of dresses and the embroidery of other things for the home."

Inside his shop he displays separate pieces with verses from the Koran and the Bible.

"One of the things that distinguishes traditional Palestinian embroidery is that it caters to the tastes of Muslims and Christians in Palestine," he says. "That's part of what makes it a symbol of Palestinian culture."

In recent years the hand-woven pieces have faced competition from much cheaper items imported from China and locally manufactured ones with machines, but Asi and the other women insist there is no comparison.

"There is absolutely a difference," she says. "When you make it with your hands it is much more beautiful than when it is made with a machine."

Source: AFP
ARU
Advertisement
<< Young Farmers In Japan Standing Up To Reinvent The Image Of ...
US Still To Grapple With Health Problems Arising From Clima... >>

Drug Side Effects Calculator Drug - Food Interactions The Essence of Yoga Nutam (400mg) (Piracetam) A-Z Drug Brands in India Selfie Addiction Calculator Pregnancy Confirmation Calculator Iron Intake Calculator How to Reduce School Bag Weight - Simple Tips Hearing Loss Calculator
This site uses cookies to deliver our services. By using our site, you acknowledge that you have read and understand our Cookie Policy, Privacy Policy, and our Terms of Use