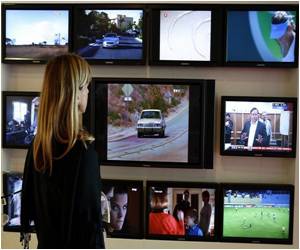 To give viewers access to its archive of productions dating back to the 1920s, Warner Bros unveiled a new streaming television subscription service.

Warner Archive Instant features films including Laurel and Hardy's "Bonnie Scotland," the 1960s comedy "Where the Boys Are," the 1959 horror classic "The Mummy" and television's 1950s series "The Adventures of Superman."

The service, which is priced at $10 a month after a free trial, allows consumers to watch on a computer or via the Roku streaming television box.


"There will be more of everything as we're trying to strike a balance," the company said in a tweet. "Stay tuned and join when you like the programming."

The service is only offered in the United States for now, Warner said.

Limiting Amount of Television Time for Kids may Not be Beneficial
Researchers at UK Medical Research Council (MRC) revealed that it may not have many benefits....

Television: the Most Popular Subject on Twitter
A report has said that nearly 40 percent of posts on micro blogging platform Twitter are about what ...

One in Ten Television Programmes Now Watched on Smartphones
According to industry data, more than one in 10 television programmes are now watched through an ......