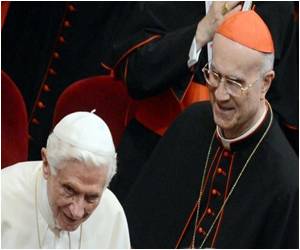 "(...) The pope kneeled for a long time praying in front of Blessed John Paul II in the Chapel of St. Sebastian," it said in a statement, adding he also made brief stops in front of the tombs of John XXII and St. Pius X.

Hugely popular John Paul II led the Catholic Church from 1978 until his death in 2005 and was succeeded by Benedict XVI, who stunned the world in February with his decision to resign aged 85.


Pope Francis was then elected on March 13.

"Tonight's visit in the Basilica expresses the profound spiritual continuity" of the papal ministry, the Vatican said.

Pope Decides to Stay in the Vatican Guesthouse
Rather than moving into the vast palace used as the official papal residence, Pope Francis ......

Vatican's Top Astronomer Says 'End Of World' Billions of Years Away
Talks of December 21 Mayan doomsday were rubbished by the director of the Vatican Observatory who .....