Madcap inventors, first-time experimenters and mothers who had a "Eureka" moment wowed visitors with their novel ideas at the annual gathering of creative pioneers in London.

Increasingly popular sports clubs and gyms for women in Saudi Arabia face shut-down because the government only licenses men's clubs, according to a Saudi newspaper report.
Advertisement 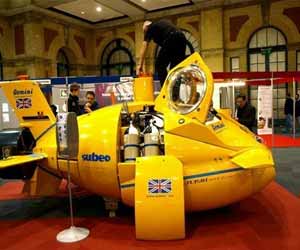 Visitors look at a two-man submarine 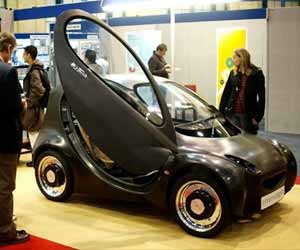 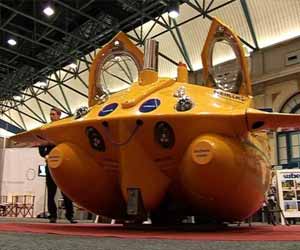 Pep Torres, an inventor from Barcelona in Spain, brought a handful of his innovations with him.


They include scratch-off postcards, magnetic tea towels that stick to the refrigerator and a pressure-sensitive floor tile that keeps fridge raiders on their diet.

The next time you want a man to know that you desire him - just let your smart memory bra do the talking!
Advertisement
"Hey! Put the cream cake down and back away from the fridge!" a strange voice says.

Torres said: "You are always thinking about new solutions. We've sold about 200 ideas.

"Everyone is born to be an inventor. Everyone has a good idea to give to the world but the problem is to take that step and try to do it."

His business card comes in a red capsule.

"One person swallowed it. It took them two days to call us," he said.

Show organiser Kane Kramer, who invented the earliest digital audio player, said anyone could come up with a bright idea, they just had to find the right problem to solve.

"I didn't know I was an inventor," the Briton told AFP.

"You get a need and then you can innovate your way around that need.

"Sometimes the solution, you could never even have imagined it was so needed until you see it," the 53-year-old explained.

"We aren't sitting on the floor now tearing a chicken apart with our bare hands eating it in front of a fire. But that's where we'd be without invention."

The ninth annual show is being held at Alexandra Palace in north London, from where the BBC made the world's first public television broadcasts in 1936.

Bulgarian entrepreneur Fredy Vasilev has invented Bathomatic, which lets busy people fill their bath at the touch of an iPod, to the right depth, temperature and aroma, and keeps the water warm.

"We tried to create the ultimate house of the future and there were systems for controlling lighting, heating, music, and nothing for the bathroom," he told AFP.

"This allows you to save energy and water."

Ehsan Yazdani has invented a portable gym, a lightweight kit on which one can do 15 different workouts, which comes out before the New Year.

"You can use it in a hotel, in the office you can have it in the drawer, on long flights, as long as you have a chair," the Iranian said.

The exercise product was inspired by being "an office worker spending 10-12 hours a day at the laptop", the telecom consultant explained.

Meanwhile, Helen Twigge-Molecey's Wondercube was inspired by her three children yanking reams of baby wipes out of the tub. Now they can pull on educational fabric squares filled with different textures.

"It dawned on me when I was picking up yet more tissues. I'd definitely say I was an accidental inventor. Now I've got other ideas for other products," she said.

Britain has long been seen as a center for innovation and now many of the finest minds are tackling climate change.

"There's a greater realization than ever that invention and innovation, which has actually caused all these problems with climate change, is actually going to be the only way we're going to mitigate those problems," Kramer said.

A survey of 3, 000 people has revealed that Britain is a nation of burping, nose-picking couch potatoes.
Advertisement
<< Placebo Effect Does Not Lie In The Mind Alone!
New-Age Shopping Means No More Trial Rooms - It's All Just ... >>

Routine Eye Examination
News Archive
News Resource
Advertisement
News Category
Is It Healthy to Let Your Mind Wander? Walk Till it Hurts: Good News for Peripheral Artery Disease Patients Plus Size Models and Social Media: Where Do They Fit In? Interrupted Sleep: Is It Good or Bad? Protecting Children from Negative Effects of Divorce?
More News
Sign up for Wellness Consult a Doctor Sign up for Selfcare