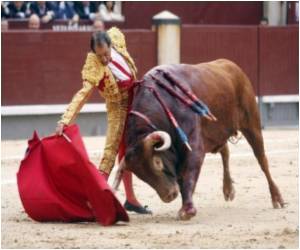 The World Cup Vuvuzela horns were banned at Pamplona's bull run festival even as thousands of people thronged the streets to watch the San Fermin running of the bulls.

The mayor banned the noisy South African trumpets because of the nuisance he said they posed to neighbours.


But crowds jammed the town hall square, most dressed in the traditional outfit of white shirts and red handkerchiefs, to watch as city officials fired a "chupinazo" cracker at noon to kick off the nine-day festival.


The spectacle of the bull runs, popularised internationally by Ernest Hemingway's 1926 novel "The Sun Also Rises", involves watching runners try to out distance the six bulls released every day to run from their corral through the old town's narrow, cobbled stone streets.

The bull runs have claimed 15 lives since 1911 and each year dozens of runners are injured.

Last year, a bull gored a 27-year-old Spaniard to death, piercing his neck, heart and lungs with its horns in front of the hordes of tourists.

The British embassy this year posted a warning telling Britons to seriously consider the risks if they join in the run.

The festival also features a range of concerts, street parties and dances, and the revellers' nightly ritual of spraying each other with red wine.

The crowd's excitement was raised even higher on opening day this year as it took place on the eve of the semi-final World Cup match between Spain and Germany.

With football fever running high in Spain, the clash with the match was one of the reasons the town banned the sale of the vuvuzela horns.

90% Young Clubbers Have Symptoms of Hearing Damage After a Night Out
A new study conducted by the charity RNID suggests that 90 per cent of youngsters, aged 16 to 30 years, experience symptoms of hearing damage-dullness of hearing or ringing in the
READ MORE

More Than a Million Expected for Spain's Famous Bull Run Festival
Fireworks kicked off Spain's annual San Fermin running of the bulls festival on Friday, with more than a million people expected, including those who will take their chances in the bull run.
READ MORE

No More Bullfighting In Tamil Nadu
An Indian court on Friday banned a centuries-old tradition of bullfighting in the southern state of Tamil Nadu, calling the ritual "barbaric".
READ MORE