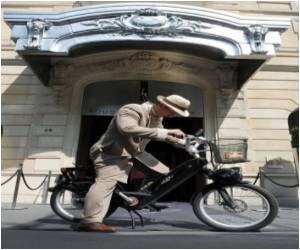 France's hotel industry, through several ways, is acknowledging the fact that there is advantage in going green.

"Our business involves a lot of water, electricity and rubbish, so our goal is to limit our impact on the environment and considerably reduce our carbon emissions," said Bernard Granier, director general of Concorde Hotels, which runs the opulent Le Crillon in Paris and the Hotel Martinez in Cannes.

The chic Fouquet's Barriere, adjoining the eponymous bistro on the Champs-Elysees, wants to cut its CO2 output by 20 percent by 2020 -- and in the same spirit, it offers guests the use of a hybrid car or an electric scooter.


At the stately Bristol, next door to the Elysee Palace, leftovers from its three-star restaurants and kitchens are put through an industrial-sized processor that extracts water used to clean the floors.

Buying Green Now may Make You Behave Immorally Later on

Even when you feel you are doing a good thing by buying green now, it is almost inevitable that you will behave immorally later on.
Advertisement
Outside the French capital, more modest establishments are going beyond the usual norm of installing energy-efficient lightbulbs or asking guests to refrain from using too many bath towels.

The Temmos group of five three- and four-star hotels in the French Alps is striving to have all its properties bedecked with European Eco-label and international Green Globe certification.

For the WWF-World Wide Fund for Nature, every green initiative is "a good thing, so long as it is coherent and not just commercial," said Mohend Mahouche, a tourism specialist for the environmental group.

"Carbon ratings are good as tools for evaluation, but what you have to look at is the way in which they are used," added Julia Haake, director for partnership with business at the WWF>

"For instance, do they take into account how far the guests have travelled -- especially if 90 percent of them are foreigners coming from far away?"

Olivier Petit of the global consulting firm Deloitte said sustainable development has become "an element of positive discrimination" -- something of an optional extra that makes a business look better.

"In five years, that will no longer be the case," he said. "On the contrary, to not adhere (to sustainable development) will be a negative factor."

Having recognised how going green can be good for business, the Gites de France network of bed-and-breakfasts has doubled to around 100 its number of certified "eco-gites" with such features as solar heating.

More than 200 more are in the pipelin, Gites de France says.

"The hotel industry has seen a real acceleration in this area over the past three years," said Philippe Francois, chairman of Francois Tourisme, a consultancy that specialises in sustainable development for hotels and tourism.

But much remains to be done, as many hoteliers think that big investments are needed in order to come across as virtuous vis-a-vis the environment -- no small consideration in hard economic times.

"In fact, 80 percent of what needs to be done costs nothing, because they involve changes in conduct and attitude which alone can be profitable in financial, environmental, social and image terms," Francois said.

Eco-warriors are No Different from Polluters

A new study of travel habits has shown that the biggest polluters are the people who are environmental conscious.
Advertisement
Advertisement
This site uses cookies to deliver our services.By using our site, you acknowledge that you have read and understand our Cookie Policy, Privacy Policy, and our Terms of Use  Ok, Got it. Close
×