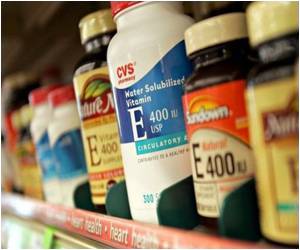 Over 5.1 million Americans are estimated to be affected by a difficulty in performing daily activities that affects patients suffering from Alzheimer's disease. These issues are among the most taxing burdens of the disease for caregivers, which total about 5.4 million family members and friends. New research from the faculty of Icahn School of Medicine at Mount Sinai working with Veterans Administration Medical Centers suggests that alpha tocepherol, fat-soluble Vitamin E and antioxidant, may slow functional decline (problems with daily activities such as shopping, preparing meals, planning, and traveling) in patients with mild-to-moderate Alzheimer's disease and decrease caregiver burden.

There was no added benefit for memory and cognitive testing with the vitamin. The study is published online first in the Jan. 1 Journal of the American Medical Association."Since the cholinesterase inhibitors [galantamine, donepezil, rivastigmine], we have had very little to offer patients with mild-to-moderate dementia," said Mary Sano, PhD, trial co-investigator, and professor in the department of psychiatry, Icahn School of Medicine at Mount Sinai, and director of research at the James J. Peters Veteran's Administration Medical Center, Bronx, New York. "This trial showed that vitamin E delays progression of functional decline by 19% per year, which translates into 6.2 months benefit over placebo." The finding is valuable because vitamin E is easy to purchase at local drugstores and it is also inexpensive. The clinical trial investigators believe it can be recommended as a treatment strategy, based on the double-blind randomized controlled trial.


The Veteran's Administration Cooperative Randomized Trial of Vitamin E and memantine in Alzheimer's Disease (TEAM-AD examined the effects of vitamin E 2,000 IU/d, 20 mg/d of memantine, the combination, or placebo on Alzheimer's Disease Cooperative Study/Activities of Daily Living (ADCS-ADL) Inventory Score. Cognitive, neuropsychiatric, functional, and caregiver measures were secondary outcomes.
Advertisement
A group of 613 patients with mild to moderate Alzheimer's disease were in the study, which was launched in August 2007 and finished in September 2012 at 14 Veterans Affairs Medical Centers.Dr. Sano previously led a study on vitamin E in patients with moderately severe Alzheimer's disease. She found that the vitamin slowed disease progression in this group of patients as well.Kenneth Davis, MD, Chief Executive Officer and President of the Mount Sinai Health System and Gustave L. Levy Distinguished Professor, applauded the study. "This study is the first to show an added benefit for vitamin E in mild-to-moderate disease," he said. "Now that we have a strong clinical trial showing that vitamin E slows functional decline and reduces the burdens on caregivers, vitamin E should be offered to patients with mild-to-moderate Alzheimer's disease." Research by Dr. Davis and colleagues contributed to the establishment of conventional medical therapies for Alzheimer's disease.

Vitamin E may Boost Heart Health for Ex-Smokers
A specific form of vitamin E supplement may help give ex-smokers an extra boost towards living a ......

Vitamin E Can Fight Obesity
A potential new way to fight obesity-related illness with vitamin E has been uncovered in a ......