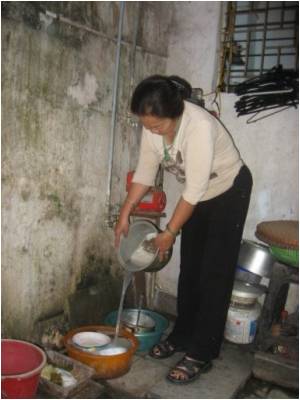 Vietnam's appetite for mooncakes is rising as adults use the annual treats, traditionally enjoyed by children, to grease the wheels of commerce.

Mooncakes are a sweet, round delicacy given to youngsters and offered to ancestors during Vietnam's Mid-Autumn Festival, which falls on Wednesday. 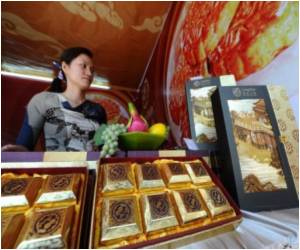 Vietnams appetite for mooncakes is rising 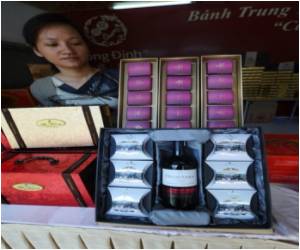 High-priced mooncakes "are for someone who wants to show off," says a housewife

But in Vietnam's rapidly developing economy they have taken on increased importance for grown-ups who use gifts of mooncakes to build business relationships.


Most of the cakes sell for about one dollar but others, sometimes elaborately packaged and made with expensive ingredients like birds nest or crayfish, can retail for almost two million dong (101 dollars).
Advertisement
That is almost three times the official minimum monthly wage for civil servants.

"Those are for the rich, and for bosses," Nguyen Thi Hoai, 42, who makes her living collecting used paper products, said outside one of the many temporary mooncake shops which have opened around Hanoi.

High-priced mooncakes "are for someone who wants to show off," a housewife who gave her name only as Huong said as she passed a shop where cakes sold for between 200,000 and 700,000 dong.

One boxed gift contained eight small mooncakes, their traditional accompaniment of tea, and the modern twist of a bottle of wine -- all for 1.5 million dong.

Tran Hung Lam, 38, a motorcycle taxi driver, said he saw some people carry out five or even 10 big boxes of high-end cakes from a shop near his parking spot.

"Not worth the money," Lam declared.

For many people, though, they are.

One woman who works for a large private firm said mooncakes are a way to thank clients, business contacts and bosses for their support.

The cakes are a way to "expand relations," added the woman who declined to be named. She said her company bought its mooncakes from a luxury hotel, not an ordinary mooncake shop.

The state Vietnam News on Friday quoted Nguyen Xuan Luan, deputy director of a major national bakery firm, as saying orders of its luxury Golden Moon cakes were up 20 percent on last year.

Large companies order the cakes to present to staff "and partners", said Luan, of the Kinh Do company.

Thang Long-Hanoi brand mooncakes had also sold well, even at 1.8 million dong for a box of four, he was quoted as saying.

More down-to-earth cakes, which can look something like an Australian meat pie, often contain a green-bean paste and come in a cheap plastic wrapper.

They are commonly given to teachers during the festival, which originated as a way to mark the end of harvest and is also celebrated by Chinese communities around Asia.

Mid-Autumn Festival, one of the most important celebrations in Vietnam's Chinese-influenced culture, is a time for children to receive toys and is marked with colourful lanterns and lion dances as well as mooncakes.

"It is traditional that one offers a box of these special cakes to someone that you want to please or owe a favour, like your landlord or the local police," said a supplement to the Vietnam Economic Times.

Gift-giving is part of the culture in Vietnam, but the country is also rated as one of the world's most corrupt.

Everyone from traffic police to health workers and teachers are widely alleged to receive payoffs.

Gift-giving is not necessarily corruption but could be, said Matthieu Salomon, international senior adviser to Towards Transparency, a local non-governmental organisation acting as the "national contact" point for Transparency International, the German-based global anti-corruption network.

"It depends on the value of the present," said Salomon, whose group is not a chapter of Transparency International.

"It also depends on how people perceive the present, especially whether they feel obliged to offer it and whether people who receive it think they have to give something in exchange."

Nguyen Thi Tham, 39, who earns about 60,000 dong a day, said she did not know whether giving cakes constitutes bribery.

"But Mid-Autumn Festival is the time to show gratitude to certain people," she said.

Dog Meat Restaurants Shut Down in Vietnam
More than 60 dog meat restaurants and slaughterhouses in and around the Vietnamese capital city of ....