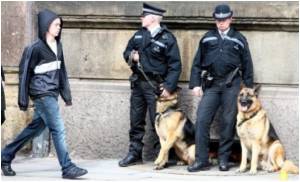 A new survey has revealed that the number of teenagers convicted for carrying knives has doubled in a decade in England.

Courts are finding under-18s guilty of carrying knives and blades at a rate of five a day, reports the Daily Express.

Seven Asian teenagers have been convicted of brutally battering a schoolboy to the brink of death with a claw hammer. In another incident, a student was impaled on a goalpost.
Advertisement

The Ministry of Justice statistics also show that in the past 10 years the number of 11-year-olds found guilty of "having an article with blade or point" in a public place has risen four-fold, while the number of 12-year-olds convicted of these offences has doubled.


Twenty 10-year-olds, the legal age limit for criminal responsibility in England, have been convicted in youth courts in the same period.

Experts said efforts by police and politicians to persuade children away from knives and gang culture had failed.

Diverse Ways Adopted by Youth to Deal With Violent Neighborhood

A new University of Chicago study has shown that violent experiences cause teens growing up in dangerous neighbourhoods to adopt a range of coping strategies to avoid violence, with
Advertisement
More than 3,700 teenagers were treated for knife injuries in English hospitals over the past five years. In the last financial year, more than 80 of those victims were under 14.

"The evidence suggests that gangs are not only increasing in number, but are also becoming more violent and members are far more likely to carry a knife or a gun than in previous generations," said Patrick Regan, who runs a charity which helps children escape from gangs.

He said children carry knives as a status symbol and for protection. Most use kitchen knives, but even broken CDs can be used as weapons.

Regan's research revealed gangs increasingly recruit "tinies", children aged seven and eight who can be used to run weapons and drugs because they are below the age of criminality.

While gang leaders were traditionally over 18, they are now commonly 14-year-old boys.

"We see 13 and 14-year-old boys who have been stabbed four or five times. The blades go millimetres from their arteries, threaten their lives but it doesn't shake them up. They think they are invincible," one London police officer told Regan.

23pc of Spanish Youngsters Getting into Drunken Fights Regularly

A research carried out by the European Institute of Studies on Prevention has revealed that night-time violence among young Spaniards is becoming more common.
Advertisement
<< Genetic Errors Behind Preeclampsia In Women With Autoimmune...
Traumatised Iraqis Find Cheer in New Ferris Wheel >>

Parents Should Not Allow Their Teen Children to Roam Aimlessly

Sanatogen Nutam (400mg) (Piracetam) Hearing Loss Calculator Pregnancy Confirmation Calculator Find a Doctor Selfie Addiction Calculator Find a Hospital Sinopril (2mg) (Lacidipine) Diaphragmatic Hernia Blood Pressure Calculator
This site uses cookies to deliver our services.By using our site, you acknowledge that you have read and understand our Cookie Policy, Privacy Policy, and our Terms of Use  Ok, Got it. Close
×