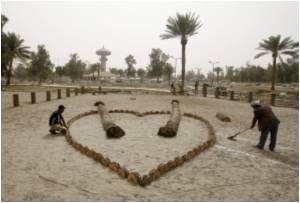 During their first outing since getting engaged in December, Haidar al-Saeedi and his fiancee dangled 55 metres (180 feet) over Baghdad, enjoying the view from a Ferris wheel that is the latest attraction in the leisure-starved capital.

The Ferris wheel, which its Italian manufacturer and Iraqi operator say is the second-tallest in the Middle East after one in Sharjah in the United Arab Emirates, has stolen the show from the tigers at the zoo and the precious few other attractions around Baghdad.

Iraq Ministry of Public Health has reportedly urged the government to ban all toy weapons over fears of making children violent at an early age.
Advertisement

For park-goers, the big wheel offers an opportunity for a bird's-eye view of a capital that is desperately flat, with few tall buildings and criss-crossed by concrete blast walls that disfigure the landscape, eight years after the US-led invasion that ousted Saddam Hussein.


"From the top of the wheel, the view is superb. Baghdad was at our feet, as if everything was nearby. It's very nice," said Haidar, who will marry his fiancee next week.

Faced with renewed threats by Al-Qaeda and still mourning a church massacre, Christmas for Iraq's Christian community will this year be a time of fear and cancelled celebrations rather than rejoicing.
Advertisement
"If the big wheel did not exist we would have gone to the shrine of Imam Kazim," said the 25-year-old bodyguard, referring to a Shiite Muslim shrine in northern Baghdad, illustrating the desperate scarcity of leisure facilities in a country struggling with the ravages of war and sectarian violence.

Because of its height the Ferris wheel, which opened last week at Baghdad's Zawra park, has become something of a novelty.

Eight-year-old Tabarak sported a big grin as she stepped off the ride with her father Abbas Fazel, who explained they had come to the park directly from seeing a doctor.

"The doctor said she was depressed and needed some fun, so I brought her to the park," said the 41-year-old, as his daughter pulled him toward one of the other dozen rides at the park.

"There is nothing to do in Baghdad, so when we bring something new people are happy," explained Mohamed Ghanem, a 27-year-old whose father bought the business under the old regime, and who now runs it together with his brother.

Before, all the rides were manufactured locally, because imports were banned under UN sanctions imposed after Saddam's troops invaded Kuwait in 1990.

But the rides, nestled in a corner of Zawra park, has been slowly modernising, with only two remaining from the old days, the revolving cups and a pirate ship that rocks like a pendulum.

The bumper cars, a go-kart circuit and a robotic arm that swings thrill-seekers in wild motions, are some of the other attractions. The newer rides are imported from Europe and all certified, said Ghanem, whose company pays rent to the Baghdad municipality.

To cope with recurring power outages that are part of daily life in Baghdad, powerful generators keep the rides going.

Crowded places have been long-time targets of insurgents, but Ghanem insists the park is "one hundred percent" safe, because all visitors are searched before entering, and because of its location next to the capital's Green Zone, a fortified district that houses many embassies and government buildings.

The new Ferris wheel, purchased for approximately six million dollars from an Italian group, replaces an older one that was only 16 metres high and built before 2003. The new one took 40 days to build and has 40 gondolas.

But not everyone is happy with the new ride.

Near the queue, a young boy pulled at his mother for a ride on the big wheel. But Faten Hussein, 48, would not be swayed.

"It's good to have more opportunities for leisure, but the big wheel is far too expensive," lamented the English teacher, complaining about the 4,000 dinars (about $3.50) for two revolutions that take about 15 minutes to complete.

But Ghanem is already thinking of the next attraction: a roller coaster he hopes will be ready for thrill-seekers to ride in 18 months.

The closure of social clubs serving alcohol in Baghdad provoked a strong protest from Iraqi writers and poets who claimed it was reminiscent of the Saddam-era repression.
Advertisement

Iraq's first specialist cancer hospital for children could not have opened in a needier location -- since 1993, Basra province has seen a sharp rise in the incidence of childhood cancer.
Advertisement