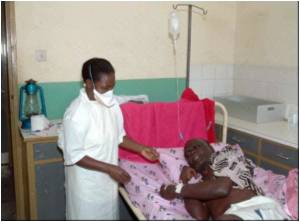 The deadly Ebola outbreak has claimed 16 lives in Uganda so far, according to reports from World Health Organization (WHO).

"Today we have 50 suspected cases and 16 dead," WHO spokesman Tarek Jasarevic told reporters in Geneva.

After the deadly Ebola virus hit Kampala, residents have been urged to avoid physical contact. However, security guard Joseph Karuba whose job is to frisk people doesn't have gloves.
Advertisement

For the time being the epidemic was restricted to the west of the country, Jasarevic said, adding that a single case reported in Kampala in the south of the country was the result of an infected person being brought to the capital.


Ebola broke out in early July in Uganda's western Kibale district, some 200 kilometers (120 miles) from Kampala, and around 50 kilometers from the border with Democratic Republic of Congo.

14 Killed In Uganda After Ebola Outbreak

The World Health Organization (WHO) said that an outbreak of the deadly Ebola virus that erupted in western Uganda at the start of July has killed 14 people.
Advertisement
The virus causes internal and external bleeding and spreads by direct contact with the blood or other body fluids of infected persons, according to the World Health Organization.

The rare hemorrhagic disease, named after a small river in DR Congo, killed 37 people in western Uganda in 2007 and at least 170 in the north of the country in 2000.

Neighboring nations -- including Kenya, Rwanda, South Sudan and Tanzania -- have warned people to report to health centers in case of Ebola-like symptoms.

The Essence of Yoga Drug - Food Interactions Vent Forte (Theophylline) Color Blindness Calculator Sinopril (2mg) (Lacidipine) Find a Doctor Loram (2 mg) (Lorazepam) Calculate Ideal Weight for Infants Hearing Loss Calculator Post-Nasal Drip
This site uses cookies to deliver our services. By using our site, you acknowledge that you have read and understand our Cookie Policy, Privacy Policy, and our Terms of Use