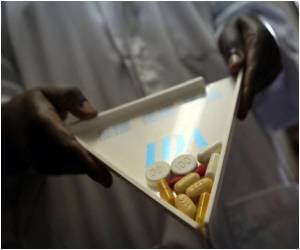 The trial of an oral pill which can help prevent HIV infection in African women has been stopped as the results were not as expected.

The US Centers for Disease Control described the results as "disappointing," and in a Monday statement said the trial's monitoring committee had decided it "could not demonstrate efficacy even if it continued to its originally planned conclusion."

The same oral treatment, known as pre-exposure prophylaxis (PrEP) for HIV prevention, has been shown to reduce risk of HIV transmission among men who have sex with men by between 73 and 90 percent.


The trial included 2,000 African women in Kenya, South Africa and Tanzania. Trial subjects were taking oral tenofovir and emtricitabine, marketed as Truvada by the California-based Gilead Sciences Inc., or a placebo.

Describes how screening for HIV is performed in a laboratory.
Advertisement
Researchers said that the rate of new HIV infections in both the drug and placebo groups was the same, with 56 new HIV cases equally distributed across both sections of the study.

They also noted that the overall pregnancy rate among women in the study was nine percent, with the highest rates seen in women taking birth control pills. More study is needed to determine if the anti-HIV treatment had a disabling effect on the oral contraceptives.

"While this development was not what we would have hoped for, Gilead believes that antiretroviral therapies remain a promising potential HIV prevention strategy," Gilead Sciences said in a statement.

The CDC sent out an email announcement about the FHI trial's end on Monday.

"Given today's results, CDC cautions against women using PrEP for HIV prevention at this time," it said.

"We will not know if PrEP is effective for women, couples, or injection drug users until the conclusive results of this and other trials are reported."

The Acquired immune deficiency syndrome is brought about by the deadly human immunodeficiency virus. In the USA alone an estimate of 120,000 - 160,000 women are HIV- infected.
Advertisement
<< 50% Men Feel Worse After Removal of Prostate Gland
Coaching Children to Shun Alcohol, Substance Abuse >>