Toll on Disabilities may Hike to 77.2 Percent of Domestic Income 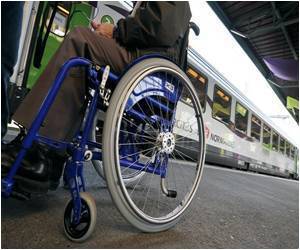 The cost and impact of disabilities on the finances of disabled people was estimated for the first time by a team of researchers. According to data, 90% of the population with a serious disability in Spain is in a state of moderate poverty and 56% lives in a state of extreme poverty.

"With a compared and contrasted methodology, our study shows how high the cost of being dependent can be and how much it can contribute to increasing poverty," explains Francisco Javier Braña Pino, researcher at the University of Salamanca (Spain) and author of the recent study that analyses the relationship between disabilities and a precarious economic situation.

International Day of Disabled Persons is observed on 3 rd December every year. The initiative underlining the theme of 'Decent work for persons with disabilities'.
Advertisement

According to the report, the cost of moderate disability (when daily activity is partially limited) is around 40% of household income whereas the cost of severe disability rises to account for 70%.


Braña states that "without taking into account income corrections (estimated disability expenses) the disabled population shows incidence, intensity and severity of poverty that are substantially higher than the national average in Spain."

The world has heard of the illustrious mathematician and physicist, Albert Einstein, whose name is indelibly etched in the 'Theory of Relativity'.
Advertisement
Furthermore, when total household income is adjusted to take into account such costs, more than 90% of those suffering from a severe disability enter into moderate poverty and 56% into extreme poverty.

According to Braña, "this situation contributes to increasing total poverty in Spain from 20% before the income adjustment to 27% after."

According to data from the Living Conditions Survey, the additional costs of disabilities have more of a devastating effect on poverty in Spain. "In general, our estimations put the cost of disability in Spain above those seen in neighbouring countries with a similar level of development," warns the researcher.

Braña declares that "with this study we hope to show the long road ahead in creating equality for disabled people which, in other words, means getting rid of the income and conversion handicaps."

One of the causes of poverty

Previous studies show that disabilities constitute one of the prominent causes of poverty. "On the one hand, disabled people lose income either through not being able to find work or from being in poor quality employment," outlines Braña. "Furthermore, given their special requirements, general well-being is more difficult to achieve with what they can afford or they may be in need of a higher income to do so."

There are extra costs associated with disabilities arising from the fact that disabled people may require things (such as heating) in greater quantities than non-disabled people. Extra costs also come from specifics goods that may be required (such as diapers) and even lower productivity of consumed goods.

In the same way, the author reminds us that "although it may not be as clear in developed countries, poverty may also cause disabilities."

The data collected from the Living Conditions Surveys since 1987 show that people from underprivileged social groups have poorer health and greater limitations in normal activity and they suffer from chronic disorders more frequently than those belonging to more privileged social groups. This applies mainly to women.

The cost of disabilities

Since the 1970's, studies have been carried out that attempt to estimate the cost of disabilities so that it can be applied to public aid headed to those affected. This is the case in Australia, the USA, Ireland, and the UK.

Braña's study used the 2007 Living Conditions Survey, which brings together information relating to household income levels as well as the social and demographic characteristics of the participants.

The researchers used a total sample of more than 28,000 adults. Braña adds that "according to our definition, approximately 2,700 of the total had a disability and over 2,100 could be considered dependent."

This situation is recognised in the social protection systems of many countries, which provide aid, whether in the form of direct or tax expenses, to make up for the higher consumption costs linked to disabilities.

Braña states that "in Spain a disabled person receives less aid than in countries where such studies have been performed, with the exception of the USA."

From this analysis, the authors of the study declare that a rethink of social and economic policy is required if the situation in Spain is to be improved. Braña concludes that "as the application of Spanish Act on care for dependent persons shows, building a welfare state creates employment even in times of severe crisis, like the one we are experiencing now."

The Essence of Yoga Iron Intake Calculator Sanatogen Hearing Loss Calculator Indian Medical Journals Drug Side Effects Calculator Calculate Ideal Weight for Infants Post-Nasal Drip Sinopril (2mg) (Lacidipine) Find a Hospital
This site uses cookies to deliver our services. By using our site, you acknowledge that you have read and understand our Cookie Policy, Privacy Policy, and our Terms of Use