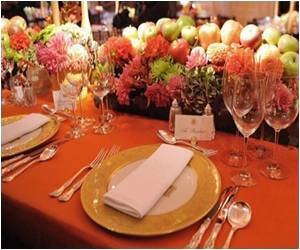 Tokyo has once again established its rightful place at the top table of world food with extra Michelin three star restaurants than Paris, commends the latest edition of the gastronomical guide.

Japan as a whole also beats France, with 32 establishments granted the maximum grade, against 25 in the guide's home country.

Spinach and milk found to have been contaminated with radiation in Japan are safe to eat and drink, says the World Health Organization.
Advertisement

While most of those included in the book serve Japanese food, a Korean restaurant was awarded two stars, while two French restaurants got top honours.

On a Helsinki street corner, a Finnish family enjoys Indian deep-fried lentil patties with yoghurt and chutney, delighting in rich, exotic morsels for the beloved warmness in the November chill.
Advertisement
A guide to western Japan released last month propelled the country into the world top spot for haute cuisine, with 15 top rated restaurants in cities including Kyoto, Osaka, Kobe and the former capital Nara.

"Japan is a unique country with many cities full of high level cuisine," said Bernard Delmas, president of Michelin in Tokyo, last month.

"This is why, though we reach the fifth anniversary of the arrival of the Michelin guide in Japan, we continue to discover new stars to introduce to our readers."

Food for the Soul at This Philippine Restaurant

In the Philippines' only Catholic-themed restaurant, Sister Evangeline Paras aims to enrich the soul as much as excite the palate.
Advertisement
<< World may Not End in 2012 Interprets an Expert After Decodi...
Abusive Boss Could be Bane to Marriage >>

Blood Pressure Calculator Blood - Sugar Chart Accident and Trauma Care The Essence of Yoga Color Blindness Calculator Iron Intake Calculator Find a Doctor Selfie Addiction Calculator Blood Donation - Recipients Pregnancy Confirmation Calculator
This site uses cookies to deliver our services. By using our site, you acknowledge that you have read and understand our Cookie Policy, Privacy Policy, and our Terms of Use