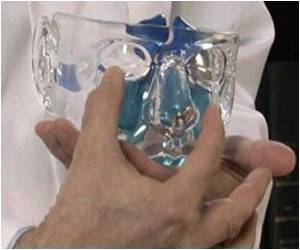 After suffering a severe nasal trauma in a car wreck, a Chinese man will soon undergo a transplant that will replace his damaged nose with a new nose that has been grown on his forehead.

At the time of the accident, the 22-year-old patient, identified as Xiaolian, did not have a plastic surgery due to financial constraints, Fox News reported.

Doctors had to resort to the extreme measure after an infection decomposed the cartilage of his original nose and made it impossible for them to fix it.


The new nose is grown by putting a skin tissue expander onto Xiaolian's forehead, carving it into the shape of a nose and planting a cartilage taken from his ribs.

'Artificial Nose' can Sniff Out Blood Poisoning, Cut Down Medical Costs
A new artificial nose that's capable of identifying the odor emitted from germs that cause food ......

Frog Cells Used to Enable the Capacity to Smell in Artificial Nose
A scientist has pointed out that with genetically modified frog cells , it is possible for the ....

Broken Nose (Nasal Fracture)
Nasal fracture is a break in the bones and/or the cartilages of the nose. They may be accompanied by...