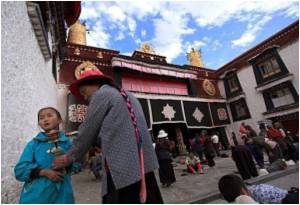 The regional authorities said that southwest China's Tibet Autonomous Region will start construction on its first genetic resource bank within the year.

The bank will help Tibet protect its genetic resources and ensure sustainable conservation, according to the regional science and technology department.

The bank will be used to preserve plant seeds, as well as DNA from animals and microorganisms.


Tibet's biodiversity is abundant, but its environment is relatively fragile, said Li Hui, a researcher from the Institute of Tibetan Plateau Research under the Chinese Academy of Sciences.
Advertisement
The bank will help to ensure the continuation of some species for further study, as well as aid in breeding research for endangered species, Li said.

Tibet is home to more than 9,600 plant species, including 855 species that are unique to Tibet. The region also has 800 species of wild vertebrates, 123 of which are under national-level protection.

10 Mln Tourists To Be Received By Tibet This Year
A local tourism official has said that Southwest China's Tibet Autonomous Region is expected to ......