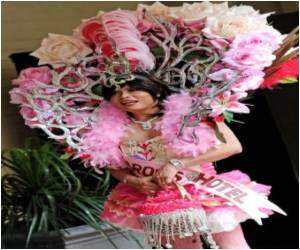 Thousands of people took part in Africa's biggest Gay Pride event in Johannesburg on Saturday, aimed at drawing attention to the persecution of homosexuals across the continent.

Organisers said more than 18,000 people took part in the protest in the economic capital of South Africa, the only country in the continent which allows same-sex marriages.

On one float, a transvestite dressed as an angel sat on a swing on a giant map of Africa which carried the slogan "We are all African!", the theme of the 21st edition of "Joburg Pride".


"We are aware of the fact that LGBT (lesbian, gay, bisexual and transgender) people across Africa are being arrested, their human rights are under threat and it's a growing phenomenon on the continent," said organiser Luiz de Barros.
Advertisement
"South Africa having an enlightened constitution, we have a responsibility to reach out to our brothers and sisters in Africa," he said.

South Africa legalised same-sex marriage in 2006, but its non-discrimination stance stands in stark contrast to much of the rest of Africa, where homosexuality can be criminally punished in 38 of 53 countries.

Study Finds One Percent of UK People Openly Gay or Lesbian
A study published by the Office for National Statistics says that more than 480,000 people or one .....