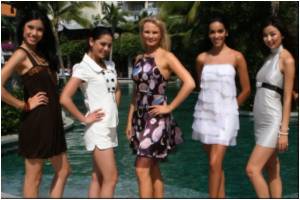 Would you choose "African" curves or an "international" silhouette? A war of words has broken out between admirers of voluptuous female figures and those who plump for a more streamlined, traditionally Western, shape on the airwaves and the catwalks of Ivory Coast.

The young Ivorian singer "Princesse Amour" is hoping for a hit with her song celebrating "lalas", the name she has given to slender, small-breasted women.

Dressed in ultra-tight skinny jeans, she sings over a pounding beat, her lyrics encouraging women to embrace their "little lemons".


"I noticed that some girls were embarrassed to have small breasts" and "felt like they had to fake it by stuffing their bras," she told AFP.

Her use of the term "lala" is no accident. It's a reference to "lolo", the word used to describe voluptuous women by Ivorian musical heavyweight Meiway in his 2000 hit "Miss Lolo". His latest smash, "Wiggle Your Bottom", a celebration of big booties, has had the whole of Abidjan shaking their stuff in recent months.
Advertisement
At a concert last year, Meiway told a handful of Europeans in the crowd: "You white people, you like your women flat and thin. Here, we like them big, with curves."

But the aesthetic at the Miss Ivory Coast beauty pageant is infinitely more "lala" than "lolo".

In Africa, "young women are becoming more and more slender", he says, pointing out that a slim woman is still considered a marketing plus for brands.

But away from the podium, old habits die hard.

"Being thin is synonymous with being sickly and malnourished in African society," laments Micheline Gueu, a candidate for Miss Ivory Coast in a regional heat in the southeastern town of Aboisso.

At the other end of the scale, however, the "awoulaba" (voluptuous women in the local Baoule language) also complain that their beauty is underrated.

On International Women's Day on March 8, the "Awoulaba" beauty contest celebrating curvy women was reinstated after a seven-year lull.

The crown was taken by Esteve Alexandrine N'Goran, who told the audience of a thousand that she was there to "honour the real African woman".

Emotional after her victory, the 38-year-old business woman and mother-of-three said that she wanted to show that women like her were both "beautiful" and "comfortable with themselves".

"Roundly Beautiful", an organisation set up in Abidjan in 2009 to support plus-sized women, lent its backing to the event. The group aims to "rid big women of their complexes" according to its president, Djeneba Dosso.

But Dosso admits that curves are not just a question of aesthetics. Ivorian women "don't exercise and eat badly" she said, so her group encourages larger women to break bad habits.

Celebrated Ivorian artist Augustin Kassi is an inspiration to many. Since 1985 he's been painting "fat women" as he describes them, in bright, joyful works of art.

A consistent opponent of what he sees as "cultural alienation", for him Miss Ivory Coast is a symbol of the "voluntary denigration of African beauty".

"The world is made up of different things" he says, paintbrush in hand. "It's a rainbow."

Source: AFP
Advertisement
<< Heart Palpitations Can Now Be Precisely Diagnosed By An Ele...
By 2030 Pakistan may Face National Food Insecurity >>

Hilary Swank Owes Her Slender Fitness to Genes
Actress Hilary Swank has revealed that she owes her fit physique to her genes....

Mariah Carey Owes Her Slender Look to 'Bleak Diets'
Singer Mariah Carey has revealed the secret behind her svelte look....

Male Jurors More Likely to Convict Obese Females Than Slender Ones
A new study reveals that male jurors were more likely to convict an obese female compared to a ......