The Grand Reopening Of Statue of Liberty's Crown 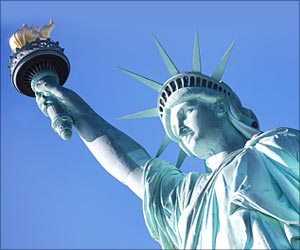 Following the conclusion of a year's repairs, tourists will be able to climb up into the crown of the Statue of Liberty starting Sunday.

Once inside Lady Liberty's head, visitors get the same view of New York Harbor and the skyscrapers of Manhattan that the famous monument has yielded for more than a century.

Statue Of Liberty To Close For A Year For Giant Makeover

The Statue of Liberty in New York will close for a year from October 28 to undergo a 27.25 million dollar renovation.
Advertisement

But access to the crown, reached by a tightly spiraled staircase going up the interior of the monument, will be limited.


"It is sold out for one month. There are 315 visitors per day allowed," Katie Lawhon, a spokeswoman, said.

The Statue of Liberty, a gift from France to America, is this country's iconic symbol of freedom and immigration. It closed for upkeep exactly a year ago after celebrating its 125th anniversary.

The $27.25 million renovation aimed to improve the stairway into the crown and add safety devices and other modern requirements.

Statue of Liberty Replica in Japan Looking for New Home

After being evicted from outside a shop in a historic Japanese port city following complaints from neighbours who branded it an eyesore, a replica of the Statue of Liberty is looking for a new home.
Advertisement
<< An Animal Model of Typhoid Fever Could Lead to Better Vacci...
In Stroke Survivors Smoking can Raise 'Death Risk' >>

Statue of Liberty's Crown to Open to Tourists Again

The Statue of Liberty's crown, off limits to the public since the September 11, 2001 attacks, will once again be open to visitors beginning July 4, US independence day.