The Chicken or the Egg? Brit Researchers Explain the Chicken Clucked First 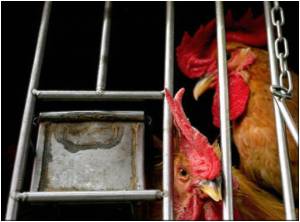 It's an age-old debate, and now British researchers may have uncovered a partial answer to "what came first the chicken or the egg?"

A new study has found that ADHD may be caused by alterations in the serotonin neurotransmission system combined with a tendency to experience psychosocial distress.
Advertisement

There is, however, a further twist - this particular chicken protein turns out to come both first and last. That neat trick it performs provides new insights into control of crystal growth which is key to egg shell production.


Scientists have long believed that a chicken eggshell protein called ovocledidin-17 (OC-17) must play some role in egg shell formation. The protein is found only in the mineral region of the egg (the hard part of the shell) and lab bench results showed that it appeared to influence the transformation of (CaCo3) into calcite crystals. The mechanism of this control remained unclear. How this process could be used to form an actual eggshell remained unclear.

Skepticism on the Promised Impact of Genetics on Medical Practice

It was predicted that genetics would revolutionise medicine and provide answers to the causes of many of our common killers ever since the discovery of gene sequencing in the late 1970s.
Advertisement
University of Warwick researchers Mark Rodger and David Quigley, in collaboration with colleagues at the University of Sheffield, have now been able to apply a powerful computing tool called metadynamics and the UK national supercomputer in Edinburgh to crack this egg problem.

Dr David Quigley from the Department of Physics and Centre for Scientific Computing, University of Warwick, said: "Metadynamics extends conventional molecular dynamics (MD) simulations and is particularly good at sampling transitions between disordered and ordered states of matter."

Using these tools, the team was able to create simulations that showed exactly how the protein bound to amorphous calcium carbonate surface using two clusters of "arginine residues", located on two loops of the protein and creating a literal chemical "clamp" to nano sized particles of calcium carbonate.

While clamped in this way, the OC-17 encourages the nanoparticles of calcium carbonate to transform into "calcite crystallites" that form the tiny of nucleus of crystals that can continue to grow on their own. But they also noticed that sometimes this chemical clamp didn't work. The OC-17 just seemed to detatch from the nanoparticle or "be desorbed".

Professor Mark Rodger from Department of Chemistry and Centre for Scientific Computing, University of Warwick, said: "With the larger nanoparticles we examined we found that the binding sites for this chemical clamp were the same as the smaller nanoparticles but the binding was much weaker. In the simulations we performed, the protein never desorbed from the smaller nanoparticle, but always fell off or desorbed from the larger one. However in each case, desorption occurred at or after nucleation of calcite."

The researchers had therefore uncovered an incredibly elegant process allowing highly efficient recycling of the OC-17 protein. Effectively it acts as a catalyst, clamping on to calcium carbonate particles to kickstart crystal formation and then dropping off when the crystal nucleus is sufficiently large to grow under its own steam. This frees up the OC-17 to promote more yet more crystallisation, facilitating the speedy, literally overnight creation of an egg shell.

The researchers believe that this new insight into the elegant and highly efficient methods of promoting and controlling crystallisation in nature will be of great benefit to anyone exploring how to promote and control artificial forms of crystallisation. '

The study appears in the international edition of the journal Angewandte Chemie.

A powerful new way to troubleshoot neural circuits associated with depression, Parkinson's disease and other conditions in small animals such as rats has recently been tried out by researchers.
Advertisement
<< Footie Hero Helps Boy Out of Coma
China Openly Embraces Its 'Sexual' Revolution >>