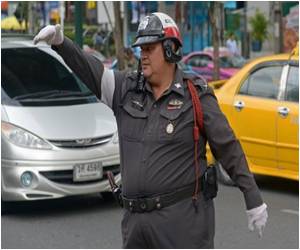 Bus conductors in Thailand's sprawling capital are stuck for hours each day in snarling traffic and have resorted to adult nappies as a radical solution to a lack of toilet breaks.

Despite years of brisk economic growth, many of Bangkok's blue-collar workers find themselves on the sharp end of relentless urbanisation and stubborn wealth inequalities.

From rubbish collectors to factory workers and taxi drivers, for many of the people who keep the sprawling metropolis of 12 million people running, rising wages do not necessarily translate into a better life.


With congestion worsening, conductors on the capital's ageing buses spend long days on the polluted roads in the tropical heat -- often with no toilet stops along the route.
Advertisement
When she developed a urinary tract infection, Watcharee Viriya had little choice but to start wearing adult nappies to cope with the many hours away from the restroom.

"It was uncomfortable when I moved, especially when I urinated inside," she recalled.

"When I arrived at the bus terminal, I had to run to get changed. I used at least two nappies a day."

She was later diagnosed with cancer of the uterus and needed to undergo surgery.

"The doctor told me that it was because of wearing dirty nappies and the substances from them going into the uterus."

With only a handful of underground or elevated rail links, many Bangkok residents rely on buses, cars, tuk-tuks or motorbikes to get around, and tax incentives have helped a growing number of people to buy their own set of four wheels.

Watcharee is not alone in opting for such an extreme answer to a lack of toilet breaks: a recent survey found that 28 percent of female bus conductors in Bangkok had worn nappies on a job that requires them to work up to 16 hours a day.

"We were shocked," said Jaded Chouwilai, director of the Women and Men Progressive Movement Foundation which carried out the research.

"We also found that many of them suffer urinary tract infections and stones in their bladders," he said.

"Many of the female bus conductors also have uterus cancer."

The gulf between Thailand's working class and its wealthy elite is one factor in a complex political crisis that has seen months of deadly opposition protests on the streets of Bangkok, culminating in a military coup on May 22.

The demonstrators wanted to wipe out the influence of ex-premier Thaksin Shinawatra, who reshaped Thailand's political landscape by wooing poor and rural voters with universal healthcare, farming subsidies and microcredit schemes.

The tycoon-turned-politician clashed with a Bangkok-based royalist establishment before he was toppled as premier by the army in 2006. History has now repeated itself with another military takeover ousting a Thaksin-allied government.

Experts say Thailand has made some progress in reducing the rich-poor gap based on the Gini coefficient, a commonly used measure of income inequality that places the kingdom behind regional neighbours Cambodia and Indonesia but ahead of Malaysia and the Philippines.

The figure fell below 0.36 in 2013, down from about 0.42 a decade earlier, according to data from the Thailand Development Research Institute (TDRI).

"Even though it has shrunk, the rich-poor gap is still considered quite wide," said Somchai Jitsuchon, research director for inclusive development at the TDRI.

"Our social and political systems have given more opportunities to people in the establishment such as the rich and big business people," he said.

Some of Thailand's worst jobs, such as working on fishing boats and as agricultural labourers, are done mostly by illegal migrant workers from neighbouring countries such as Cambodia, Myanmar and Laos.

Unlike their more assertive European counterparts, Asian workers rarely strike. In Thailand, it is illegal for employees of state enterprises to walk off the job.

But Bangkok's bus conductors and unionists are starting to speak out to demand better working conditions.

"Their working conditions are not good," said Chutima Boonjai, secretary of the Bangkok Mass Transit Authority labour union, who has asked for more toilets to be placed along bus routes or in bus terminals.

"They have to work long hours in the heat and when they are hungry, they cannot eat. When they want to go to the toilet, they cannot," she said.

"The worst cases are cancers, strokes and high blood pressure because of tiring and hot working conditions," said Chutima.

Perhaps unsurprisingly, it is a struggle to attract new recruits to work on the buses with a starting salary of 300 baht a day -- about $10.

And far from improving their lives, smartphones and other technological innovations have only made their jobs even harder.

"If they're not happy for any small reason, people can use the technology to complain about our services, but they don't think about how the workers feel," said Chutima.

Diaper Rash
Diaper rash is an inflammatory skin condition that occurs in the diaper areas and commonly seen in ....

Incontinence Spells Trouble for Women
Most women are through urinary incontinence but they can take heart as there are treatments for ......