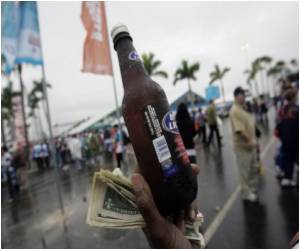 Two testing techniques can identify bottles of alcohol which has cocaine dissolved in it that will help customs officials in their anti-smuggling operations, claim UK and Swiss researchers.

Cocaine is among the most common drugs of abuse and a large number of imaginative techniques of smuggling cocaine through border controls have been reported in recent years. One of the latest techniques involves smuggling cocaine dissolved in liquids, which led to the death of a UK man last year after unknowingly drinking from a contaminated bottle of rum. It is currently impossible for customs to check alcohols for cocaine without physically opening the bottle and causing damage, which is difficult in large or expensive alcohol shipments. Furthermore, a non-invasive approach has the advantage that it would not arouse the smuggler's suspicions and therefore would allow investigators to track the recipient.


The RS study was carried out by researchers from the Universities of Bradford and Leeds in the UK and used a portable scanner to test cocaine dissolved in ethanol and several branded light and dark rums, in a variety of coloured glass containers; clear, brown, light green and dark green. The cocaine was detectable in all liquids tested and through all of the glass colours.

Drug Abuse Screening Test (DAST) is a screening test to find out if you need professional help with 'Drug Abuse' problem. This is only an anonymous self test.
Advertisement
"Until now it has been difficult to detect cocaine in liquid form in these environments. However our study shows that using an analytical technique such as Raman spectroscopy can successfully detect the presence of these drugs without removing specimens from their containers," said Dr. Tasnim Munshi, one of the researchers based at the University of Bradford. "We believe a portable Raman instrument will prove vital in the fight against illegal drug smuggling by allowing for the fast and effective screening of different solutions over a very short space of time."

The MRS study was carried out by a Swiss team, led by Dr. Giulio Gambarota of the Swiss Federal Institute of Technology Lausanne. The researchers used a MRI scanner to test wine bottles contaminated by cocaine. The MRI scanner is not portable but can test large cargos at once in a few minutes, including set up and evaluation of the results.

"By fostering collaboration between police or customs officials and a local medical department, this technique can be used to evaluate large numbers of bottles in a short time, giving information not only that there is another substance in the alcohol as with current scanning techniques, but exactly what that substance is," said Gambarota. "This method could also be used in other sorts of smuggling where drugs are dissolved into liquids, so there are many further opportunities for use."