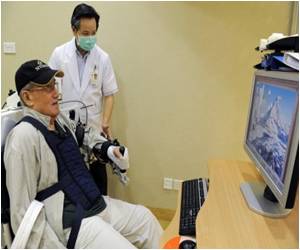 A helping hand sought by people who have lost the use of their arms due to stroke comes in the form of a robotic arm that can 'telepathically' respond to your thoughts.

A new research, led by Rice University and the University of Houston, has led to the development of an exo-skeleton which covers the arm from fingertips to elbow and can help perform simple tasks, as well gently assisting - and sometimes resisting - movement to build strength and accuracy, the Daily Mail reported.

Creative engineering has been used to unravel brain mechanisms associated with one of the most fundamental subjective human feelings: self-consciousness in a new study.
Advertisement

The new neurotechnology will interpret brain waves using an EEG neural interface, which can read thought patterns and assign them to movements.


Repetitive motion has proven effective at retraining motor nerve pathways damaged by a stroke, but patients must be motivated to do the work, said principal investigator Marcia O'Malley, an associate professor at Rice and director of Rice's Mechatronics and Haptic Interfaces Lab.

Canadian astronaut Dave Williams, who participated in two space shuttle missions, has now taken up a new post.
Advertisement
Initially, EEG devices will translate brain waves from healthy subjects into control outputs to operate the MAHI-EXO II robot, and then from stroke survivors who have some ability to initiate movements, to prompt the robot into action.

That will allow the team to refine the EEG-robot interface before moving to a clinical population of stroke patients with no residual upper-limb function.

When set into motion, the intelligent exoskeleton will use thoughts to trigger repetitive motions and retrain the brain's motor networks.

Source: ANI
Advertisement
<< Feeling in Paralysed Patients Restored By Stem Cell Jab
Too Much to Drink can Cause You a Hot Face >>